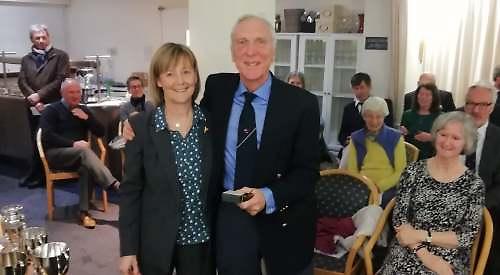 AS ever, the club’s annual meeting on February 2 was a celebratory prelude to the new season and a look back at the success of last season.

As members enjoyed the salubrious surroundings of Henley Golf Club, they were reminded of just what a good year 2018 had been for the club.

Membership increased and there was some great sailing under what seemed like an ever-present and scorching sun and some enjoyable social events with excellent food.

One of the highlights of the evening was the presentation of a barometer, which was first presented as a prize at the club more than 100 years ago and brought back from Australia three years ago after it had been identified at an auction house there.

Now the barometer is presented annually in recognition of a member’s outstanding contribution to the club, in any capacity.

This year the honour went to Tim Haigh, from Henley. During his many decades of membership of the club, Tim has spent a number of years on the committee, as rear and vice-commodore, then commodore in 1990 to 1992.

He has constantly strived to improve the club in numerous ways as well as being a regular racer on the water.

Of course, there were numerous other cups and trophies to be presented. Katie Cadwallader was a notable winner this year, taking first prize in no less than six series and events. There was also recognition for one of our younger members, Digby Martin, whose perseverance was rewarded when he won the Junior Cup.

Having performed with distinction for three years, commodore Carol Stitson has chosen to step down and the members were vocal in their thanks for her contribution.

David Skinner was proposed as Carol’s replacement and was heartily approved by the floor.

The new commodore used the opportunity of his election to emphasise the focus of his tenure, namely all aspects of members’ enjoyment of exhilarating, competitive and safe racing — the healthy activity that has been the core of the club for so many years.

Equally as important will be the continued development of all the family-on-the-water activities and facilities to build on the success of the last few seasons in this area.

David said: “One thing I will promise to the membership is that during 2019 we will encourage lots of constructive conversation — and listening to each other — so we continue to make this club the very special place it is for all members.”

We’re always welcoming new members and with the new season just around the corner there couldn’t be a better time to come and see us.