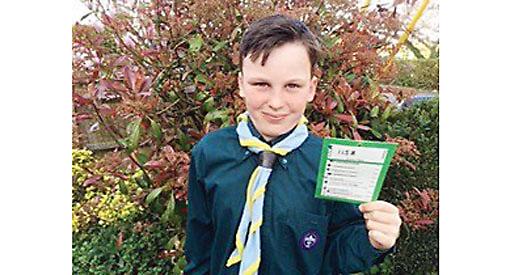 A BOY helped raise almost £500 for charity with a 25km sponsored walk.

Callum Gordon, 11, of Highlands Lane, Henley, was part of a team from the 89th Reading scouts in Emmer Green who attempted the Three Towers hike earlier this month.

The scout challenge involves taking on one of three routes of different lengths around South Oxfordshire and Berkshire.

Callum was in a team called Then There Were Three with Daniel Cleare, 12, and Sofia Mehmet, 10, who took on the route for 10- to 14-year-olds.

They walked through Pangbourne, Warren Farm and East Ilsley before finishing at the Compton scout headquarters.

Callum’s mother Nicky Jex said: “He has just moved up to the scouts and the hike happens annually.

“One of the leaders asked who wanted to do it and they started off with about five teams of three. They arranged practice walks of about eight miles around each half of the route and a few of the teams started to drop out. Eventually Callum’s was the only one left.”

The hike took them a total of nine hours and 58 minutes, making them the youngest group to do it that quickly.

Mrs Jex said: “They weren’t accompanied by an adult. There are checkpoints but they are given a compass and have to navigate their own way.

“They usually try to put them in with a scout who has done the walk before but Callum and his friends were all brand new.

“They stuck with it when a few other teams dropped off. He said it was hard but he enjoyed it. When I picked him up I thought he would be exhausted but he was buzzing on the adrenaline.

“They were told to keep talking to each other and not to sit down for too long at the checkpoints. They also demolished all their chocolate!”

Calum, who lives with his mother and father Alistair Gordon, a roofer, and siblings Tilly, eight, and Quinn, five, was raising money for the Alzheimer’s Society as a close family member suffers from the disease. He broke the £400 barrier while on the walk and is now up to £470 with donations from family and friends, including fellow pupils at Valley Road Primary School in Henley.

Mrs Jex said: “He decided he wanted to raise some sponsorship for the charity. He was adamant so we set up a JustGiving page.

“While he was out walking on the day he got a lot of sponsorship.

“He was really pleased with the total and we are so proud of him for sticking with it.

“I told him, ‘you can’t give up when you’ve got all these people sponsoring you’.

“I asked him if he would do it next year and he said definitely. He’s very pleased with himself for having completed it as it’s hard work and a long time to keep walking.”