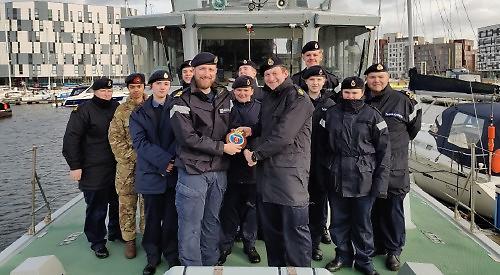 A FORMER Henley sea cadet took his former unit out to sea on board a Royal Navy warship.

The cadets were given a tour of the ship and shown sea survival gear before the ship made her way down the River Stour, passing through Ipswich lock.

“It’s great to be able to give something back to the unit and people who first taught me the basics of navigation and ship handling,” said Lt Vail.

“The principles I use on board this patrol craft are no different from the skills I learnt at sea cadets on the River Thames, manoeuvring small boats round the eyots.”

During the day long visit, HMS Trumpeter’s crew of five demonstrated a man overboard drill and encouraged the cadets to try their hand at steering the ship.

“What we saw on the ship will help the cadets with their training and provide real world value.”

The cadets were presented with an ornamental ship’s crest from HMS Trumpeter. Lt Vail was a Henley sea cadet for five years and joined the Royal Navy in 2015. He was a Gillotts School pupil and Henley College student.

HMS Trumpeter is primarily a navigation training ship and one of 14 patrol craft based around the UK.

She is affiliated to Cambridge University’s royal naval unit and deploys annually around the UK and further afield to the Baltic Sea during the summer.