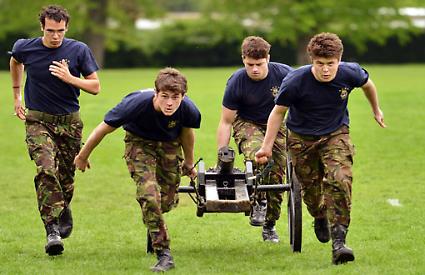 Rear Admiral Bennett, who served in the navy for five years before joining the Ministry of Defence and taking the honorary role, was at Reading Blue Coat school on Friday, May 2 for the combined cadet force’s biennial inspection.

He met almost 200 cadets from the navy, army and RAF, who demonstrated some of the skills they have learned including sailing, shooting and bushcraft, even making a meal from nettles found in the school’s grounds.

After the inspection, the school band played a medley of music from “Star Trek” and “Star Wars” before the cadets took part in a tug of war and the traditional field gun race.

The race involved taking apart a large cannon, carrying the parts over an assault course and reassembling it on the other side.