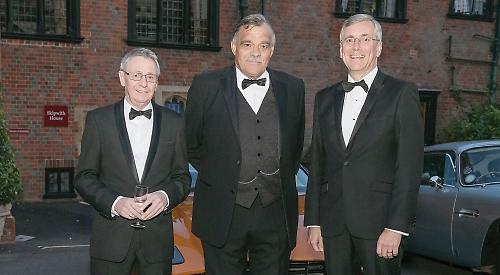 A CHARITY dinner with a James Bond theme raised thousands of pounds for the Sue Ryder hospice in Nettlebed.

More than 70 guests attended the black-tie event in the Great Hall at Shiplake College.

Jenny Hanley, who starred in the 1969 Bond film On Her Majesty’s Secret Service and used to live in Sonning Common, spoke about her time as a Bond girl.

There was an auction of fine art and 007 memorabilia, including a replica poker set from the 2015 Bond film Spectre and a book charting the history of Elstree Studios. This was led by Jonty Hearnden, star of the BBC’s Cash in the Attic and Put Your Money Where Your Mouth Is.

Other prizes included dinner with former England cricket captain David Gower at the Crooked Billet in Stoke Row and the loan of an Aston Martin for a weekend.

Two new Aston Martins were parked outside the entrance to the Great Hall and a guest had brought along his iconic DB5. The event was organised by Richard Reed, Rick White and Peter Webb.

He said: “Everything went extremely well and we were very pleased with the evening. It looked like Henley at its very best. The staff at Shiplake College were fantastic and the hall looked brilliant.

“Thanks to everybody who came because Sue Ryder is a great charity.”