Teenager who's aiming to be the next Lewis Hamilton 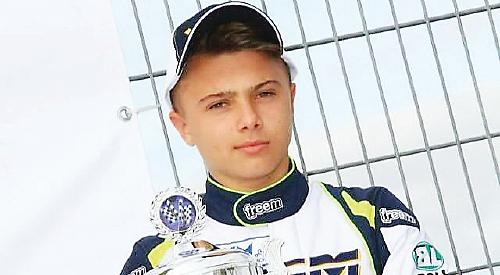 MAX FEWTRELL was eight when he decided he wanted to be a racing driver after trying go-karting.

Nine years later, he is on the path to fulfilling his ambition after being signed up by Renault’s Formula 1 academy.

It is quite a rise for the 17-year-old from Shiplake, who moved halfway across the world and gave up almost all his free time — and school — to pursue his dream.

Max, who is only just eligible to take his driving test, has been hailed as a natural racing driver by coaches and clinched last year’s Formula 4 British Championship title at the first attempt.

He was born in Birmingham but spent his early years living in Malaysia and Singapore, where his parents Paul and Louise’s financial advisory business is based.

It was during the summer school holidays that he went go-karting with friends and discovered that he loved the thrill of track racing.

Max recalls: “I enjoyed it so much that after that it was what I wanted to do. Every day after school I asked my dad if could we go again.”

After a few more trips to the track, he and his father decided to form their own team.

“We called it Rock Racing,” says Max. “We hired our own mechanics and raced under our own name for the next year-and-a-half.”

He had his first taste of success in 2010, when he won the Asian Karting Open Championship by a huge margin.

By then he was competing around the world but the racing and travelling was taking up so much of his time that Max dropped out of school so he could focus on his sport.

He was 11 when his parents decided to leave Singapore and move back to the UK to help their son’s career.

Max competed for Mark Rose Racing for his first two years before switching to Ricky Flynn Motorsport in 2013.

He was home-schooled when he was not competing or travelling.

“I entered every race I could and was away every weekend,” says Max. “I did the European championship, world championship and all the Italian races. Europe, and especially Italy, has the highest level of karting. I did hundreds of races.”

He quickly progressed through the ranks of karting, soon reaching senior level and also racing KZs, which have six gears and reach speeds of up to 100mph.

Max says: “Considering how small the karts are, it’s crazy. About 100 go-karts would be in each race and 34 would qualify for the final. After a few years of racing, you know who the idiots are but if you are in the middle with a few hazards around you it’s not fun!

“When I joined the seniors I came second in my first race, which was really good, but after that I kept crashing or being crashed into. It was so much money every time I was taken out.”

In 2015 he decided to quit karting in order to move up to Formula 4, which uses single-seater racing cars.

Ahead of his F4 debut, Max entered the MRF Challenge, a four-round winter series in Abu Dhabi, Bahrain, Dubai and Chennai, in which he competed against the son of the seven-time F1 champion Michael Schumacher and the grandson of Emerson Fittipaldi, who won the F1 title twice in the Seventies.

Max says: “That was my first time racing in a single seat. It’s very different as the only thing you can take from karting is the lines and the feel for racing but essentially you have to start again.

“I was racing against people in their twenties who have been racing in F3. I got a podium in the end and I learnt a lot.”

The experience paid off as Max made a flying start to his maiden Formula 4 season in 2016 with his new team Carlin.

He says: “Straight away we were in the top three in qualifying and I felt quite comfortable.

“We had prepared really hard and the objective from the start was to win the championship or finish in the top three. After all the pre-season tests I was really quick and we knew we had a chance.”

Max drew plaudits with an impressive series of results, including victories at Donington Park and Rockingham Motor Speedway among 12 podium finishes.

Each race weekend featured three races with a total of 30 throughout the season feeding into the final standings.

Going into the final round at Brands Hatch in October, Max knew he needed to drive well in order to win the title.

But things got off to a bad start when his trademark speed abandoned him during the practice round.

“I was a second off the pace,” says Max. “In racing that’s centuries. I’d never been that far off before. I wasn’t so much angry or worried as confused.

“It was the last practice round of the last race of the season and I finished it not knowing if I was going to qualify.”

In fact, he turned his form around and qualified on pole for races one and three.

By the time the final race began his title rival Sennan Fielding was three points ahead of him in the standings, meaning Max needed a win to be sure of the title. Fielding was sixth on the grid.

Max says: “That final race was a long 20 minutes. I can remember the whole thing as it was quite an experience. After the first three laps I thought he couldn’t possibly get through but he was third after the third lap.

“I could see him in my mirror and he was on it. I had no option but to be quick. I had one wobble on a corner when I went in too fast but that was just the pressure.”

When he crossed the line, Max knew he had sealed the title and felt a huge sense of relief.

“Those 30 races throughout the year were so stressful and it really wasn’t over until the final race,” he says. “For the rest of the day I didn’t have a lot of emotion, I was just relieved and in shock.”

Renault’s talent-spotters had attended the penultimate round of the season at Silverstone to watch him but Max had a bad weekend in the wet.

“In qualifying I ended up fifth,” he says. “In one of the races I spun and ended up last but managed to make up a few positions.”

Perhaps ironically, it was this performance that impressed the visitors.

Mrs Fewtrell explains: “It almost felt like the kiss of death when Renault came to watch him but they were actually more impressed with him being last and driving through the pack.”

Max says: “Renault said if I won the championship we would talk. I was excited and nervous but we had to wait two weeks while they put the contract together for us.”

He signed a deal last month and joined Renault’s academy programme, where the next generation of Formula 1 are nurtured and trained.

He has already been on training camps in Lanzarote and Tuscany as well as meeting the team’s current Formula 1 drivers, Jolyon Palmer and Nico Hulkenberg.

Max says: “They give me fitness help, media training and access to all the fitness camps. I can fly over to Paris to go on the simulator as well as training at the F1 factory in Enstone whenever I want.”

While he’s in the academy, Max will race with his Tech One team in Formula Renault GP3 around Europe.

He says: “It’s a really high-level championship. The cars are harder to drive and it’s very different to F4.

“The second- and third-year guys have a real advantage as they know the tracks and the cars but I don’t think they are unbeatable. I would be really happy with a top five or top three finish and I think that’s possible.

“If I get top five I think they will put me in GP3 for two years and then Formula 2. I could be in F1 in four or five years.”

“You do feel in awe of them,” he says. “I really respect and look up to them but I want to race against them!

“On the track Lewis always delivers but off track I really like Daniel Ricciardo. I like Max Verstappen too — he’s a young guy showing them all how it’s done and bringing a bit of karting to F1.”

With a cabinet full of trophies, a jet-set lifestyle and a reputation for speed, Max has all the makings to be Britain’s next F1 superstar but he is not getting ahead of himself.

He says: “All the team say is perform and you will probably get there, that’s it.”