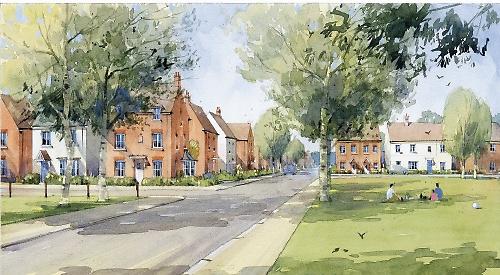 A DERELICT garden centre near Henley is to open for the first time in eight years so that residents can inspect plans to redevelop it.

Alex Hersham and his mother Aida Dellal, who own the former Wyevale site off Reading Road, near Shiplake, are proposing to build up to 40 new homes and offices on the 4.5-acre site.

The land, which has been vacant since the business shut in 2009, is earmarked for only commercial use in the joint Henley and Harpsden neighbourhood plan but the pair this would not be financially viable.

they are proposing a “mixed use” development with housing built by Adam Architecture, which specialises in classical and traditional homes. The site is adjacent to Thames Farm, whose owner Claire Engbers has been granted permission for 95 homes on the 14-acre site.

When the pair first announced their plans just over a year ago, South Oxfordshire District Council said they did not have enough evidence that the site could not be restored to its previous use and asked for more proof that it had been actively advertised.

Mr Hersham and Mrs Dellal now say they have “aggressively” marketed the land and commissioned a second independent review which showed that an exclusively commercial scheme would make a loss because the sale value would be less than the development cost.

The pair they will not submit a planning application unless residents are happy with their proposals.

Mr Hersham said: “We’ve been doing a lot of viability work over the past 18 months and the figures make it very clear that commercial use alone won’t come close to being viable. shows it wouldn’t even make a marginal profit but a substantial loss.

“We have been in dialogue with parish councils and Henley’s neighbourhood plan steering group and are now inviting the public’s views as a continuation of that process. From the talks we’ve had so far, I think the need for redevelopment is recognised.

“It’s a high-quality site and one that’s earmarked for development in the neighbourhood plan, so it’s just about bringing it forward in a way that’s sensible and compatible with the needs of the local community.

“It is a brownfield site that provides a unique opportunity for community and commercial space and much-needed family homes. It’s in a convenient and accessible location and wouldn’t set a precedent for other planning applications on nearby greenfield land.”

Tudor Taylor, chairman of Shiplake Parish Council, said: “We are totally opposed to any residential development on that site but would welcome light industrial use.” Ken Arlett, chairman of Henley Town Council’s planning , said: “Henley has lost out on some affordable housing that was meant to be built under the neighbourhood plan.

“It may well make sense to go for mixed use at Wyevale. It’s not in Henley but it is in the neighbourhood plan.”

Earlier this year plans by watchmaker Bremont for a new 34,000 sq ft headquarters at Sheephouse Farm, off Reading Road, were approved even though the site isn’t earmarked for commercial use in the neighbourhood plan.

Members of the public are invited to the garden centre site from to 7.30pm today (Friday) and to 2.30pm tomorrow.