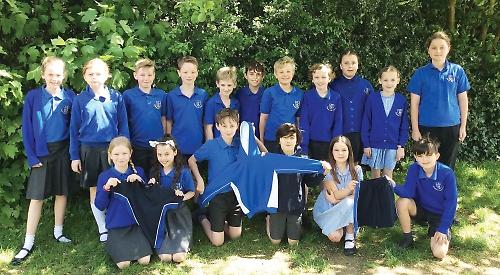 PUPILS at Shiplake Primary School are designing their own branded sports kit.

The school’s 17 sports ambassadors came up with the idea for the kit featuring its logo for tournaments in order to emphasise pupils’ pride in their school.

The current kit consists of plain blue shorts and a white T-shirt.

The ambassadors have been working on designs for the new kit which could include a T-shirt, hooded top, hat, tracksuit bottoms and leggings.

It could feature pupils’ names or incorporate the colours of the school’s four houses, Red Ash, Blue Beech, Yellow Willow and Green Oak.

The school is currently in discussion with suppliers and the new kit could be ready for parents to purchase at the start of the new school year in September.

Headteacher Katherine Page-Howie said: “It came about from the pupils taking such pride in representing the school at different tournaments and feeling we didn’t have a set kit which was branded. They spoke to Sonia Smith, our specialist PE teacher.

“All of them did different designs and discussed it as a group and narrowed it down to a set kit.

“They are looking at local suppliers and working out the cost with the bursar to see what is realistic.

“It will be down to parents whether they choose to have it as their children’s sports kit.

“I’m keen particularly in one pupil voice and ensuring that children are involved in education right the way across the school. It means they become more involved and take more responsibility in different areas of school life.

“The sports ambassadors very much worked as a team to develop this. They have been really excited about it and rightfully so.

“It has been a really important process for them working together as a team and the enthusiasm has been great to see.

“I’m genuinely proud of them taking it so seriously. I think it’s really important and wonderful to see at such an early age.

“I would very much hope the parents will be supportive.” Last year, the school was in the top 300 best-performing primary schools in reading, writing and maths, in the top one per cent in England for attainment in maths and in the top six per cent for phonics.

Mrs Page-Howie added: “We’re really lucky here at Shiplake primary because we work with the most amazing children and talented staff and results like that don’t just happen on their own, they’re a testament to the hard work that goes on.

“It’s a really happy school and if children are happy they are going to learn more effectively. I’m just a happy headteacher.”