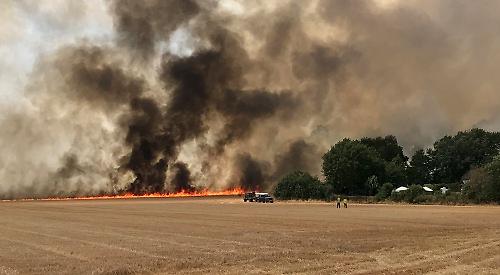 Firefighters battled a blaze which destroyed 20 hectares of arable land.

The fire broke out this afternoon (Thursday) shortly after 1pm after farm machinery caught alight in the land off Shiplake Row.

It quickly spread to an adjacent field as a result of strong winds.

Fire crews from Henley and Wallingford attended, supported by colleagues from the Royal Berkshire Fire and Rescue.

More than 60 firefighters used breathing apparatus and hoses to get the blaze under control at about 2.30pm.

A straw bailer, cultivator and water bowser were destroyed in the fire. The land is owned by the Phillimore Estate and farmed by the Doble family.

Adam Timms, who works at Amners Farm in Burghfield says he was using the bailer to collect straw he had bought from the farm when the fire started.

He said: "I just saw smoke so I phoned the fire brigade immediately and the next thing I knew it was like this.

Mr Timms used the cultivator to dig a fire break before it was also engulfed by the flames.

Tractors were also used to create breaks at the boundary of the fields to stop a strong wind blowing the flames across the road to the north.

Thick plumes of black smoke could be seen in the area.

Ryan Simpson, who runs Orwells restaurant, says five staff and six customers had to leave the restaurant because of the blaze.

Properties in Shiplake Row also had to be evacuated by Thames Valley Police and residents nearby were told to keep their doors and windows shut.

Firefighter Stuart Barton, from Calcot fire station, said: "The initial reports were of farm machinery on fire and it has spread from there.

"We have got to consider property protection, smoke plumes and the wind direction.

"We also have water supply issues so we have a variety of supply vehicles here."

Firefighters will remain at the scene overnight.

Oxfordshire Fire and Rescue Manager Paul Bremble said: “This incident escalated rapidly because of the extremely dry conditions and a strong wind.

“We would again urge the public to take extreme care in the countryside as the heatwave continues.

“That means no open fires or barbecues except in designated areas and not throwing cigarette ends from vehicles.

“If you do spot a fire in the countryside, don’t tackle it yourself, dial 999 and give us as precise a location as you can using road junctions and local landmarks where possible. The quicker we get there the quicker we can contain the incident.”

The hot weather has caused several field fires in the area in recent weeks, with tinder dry grass and crops easily ignited.

Eight fire crews battled a blaze on farmland in Kidmore End on Sunday (22) after a bonfire spread, while 800sqm of farmland in Ewelme was destroyed in a fire on Saturday, July 14.