The school run that’s good for all 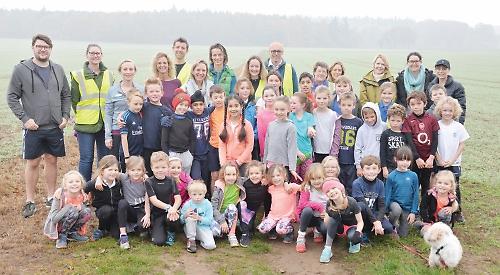 WITH concerns about an obesity crisis among Britain’s children, one primary school is helping to prevent it.

Shiplake Primary School has a weekly running club that is helping pupils to stay healthy and perform better in the classroom.

Almost a quarter of the pupils, on average, takes part in the run on Tuesday mornings, running distances of up to four miles around farmland off Memorial Avenue, opposite the school.

Organiser and year two teacher Helen Boucher said that not only had the children’s fitness improved but they were more focused in lessons and had grown in confidence.

Many now also compete at the Oxfordshire schools’ cross-country winter series of races.

The club used to be held during the pupils’ lunch break before being relaunched as a morning run.

Miss Boucher said: “It has got much bigger and grown in popularity. This year we have on average 40 each week, which for a small school is quite good.

“We’re now getting children who don’t necessarily want to compete but who enjoy running.

“It’s very much fun and enjoyment first but quite often children who didn’t necessarily think were talented find they actually are.

“It is entirely up to them how far they run. They are encouraged to do a lap, which is one mile, and our better runners are doing four.

“There’s a sense of achievement as it’s not easy running a mile and I’ve got year two children running three or four miles and they are only six years old.

“There’s a real sense of camaraderie and they keep each other going.” Holly Gregan’s daughters, Honey, nine, and Coco-Wren, six, from Binfield Heath, take part every week.

She said: “It’s a fantastic way of getting kids out and exercising and building it into their curriculum routine.

“I’ve seen an improvement in the girls’ fitness and I just love the fact the school is encouraging fitness and wellbeing for the children.

“Coco manages to do three miles which for a six-year-old is really good. She says things like ‘I’m really proud of myself for doing that’, which is a lovely thing to hear your child say.”

Honey said she enjoyed running with her sister and getting fresh air.

He said: “I switch between marshalling and running. I try to keep up with them, if I can, which is increasingly difficult!

“We started doing the parkrun in Woodley and the boys enjoyed that so we’d thought we’d try the running club here.

“It’s a lovely thing to do together and they get so much out of it. It sets them up for the day — they feel more energised.”

Alfred said: “I usually run three or four miles and it has got easier over the last year. I think I might do the Henley 10km next year.

Edward added: “I usually do three miles — I like to keep fit.”

She said: “I think it’s great to be up early and getting out and running. I’ve noticed a difference in fitness and confidence.”