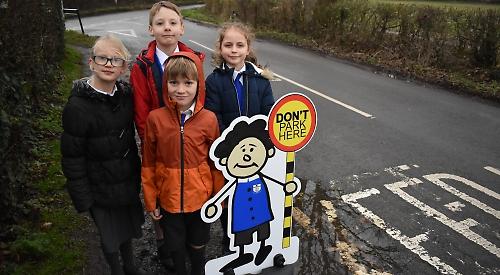 The two laminated cut-outs, which depict a child holding a lollipop sign saying “Don’t park here”, have been placed near the junction of Memorial Avenue and Plough Lane.

The school says some parents dropping off or collecting their children park near the junction, which causes visibility problems for other drivers and congestion.

Jane Chesters, co-chair of governors, said there were markings on the road near the junction reading “Keep clear” but these were often ignored.

“We have the same challenge that I think lots of schools have,” she said.

“Ideally, people would walk their kids to school but that’s not something everybody is in a position to do so children need to be dropped off by a car. We have a particularly confined site here and two accesses that are both by roads which are pretty busy at that time of the morning with people driving to work in Henley or Reading or vice- versa.

“We don’t have dedicated parking spaces for parents to use and there’s a limited amount of on-street
parking.

“We have children coming by bus and also a walking bus where we arrange for children to be dropped off near the Memorial Hall and walk up together.

“We haven’t had an accident but I think we have probably had a number of near misses,” she said.

Mrs Chesters, whose daughter Tara is a pupil, spotted the same type of warning signs outside a school in Great Missenden while visiting a dentist.

She said: “I thought, ‘they are really striking — it’s like a real person standing outside. I wonder if we might think about that for our school’.”

The signs are mounted on a base to keep them stable and are easily movable.

Mrs Chesters said: “We purchased the ‘little people’, who we have been able to personalise with the Shiplake uniform and logo, and put them up at the beginning of this term.

“The results so far have been really positive — we have noticed a massive reduction.

“For me it has been a very cost-effective and safe way of doing it. Parents have said it’s a great idea.”

The signs have also been welcomed by the children.

Emily Palmer, seven, said: “They look like they are actual people and I think people will park safely. My mum thinks it’s a good idea.”

Georgie Grocock, nine, said: “I think it’s good because it’s less dangerous and people will soon find out why they are there.”

Katherine Bryan, whose daughters Jecca and Emily attend the school, said: “I did notice these signs and I think they are brilliant — anything that cuts down the amount of traffic outside a school, especially at such a horrible corner.”

Ben Mynott, whose son Toby is a pupil, said: “Sometimes you need more obvious signs for some parents.”

Headteacher Katherine Page-Howie has been contacted by Sacred Heart Primary School in Henley to ask about the signs as it has a similar problem with parking in Greys Hill.