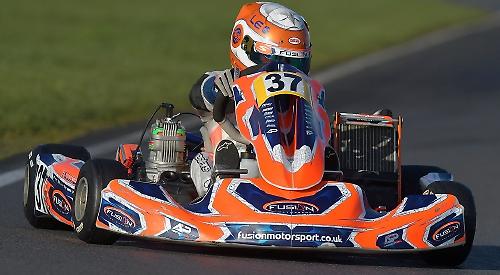 A YOUNGSTER from Henley has been crowned world champion in the Mini X30 kart class.

Leo Robinson, 11, of Lambridge Wood Road, triumphed at the world final in Portimao, Portugal, by 0.1 seconds.

The final was held over a week, with regular covid-19 testing in a closed paddock under secure conditions.

The Mini X30 class, for drivers aged under 13, was contested by 30 drivers from 10 different countries.

The track offered a challenging mix of long straights and slow, complex corners that required a compromised kart set-up.

The event started reasonably well for Leo with him qualifying in second position for a grid slot on the outside for the first turn. In the first of three qualifying heats, Leo was judged to have jumped the start and was awarded a 10-second penalty. This resulted in him finishing in ninth place.

Leo, however, made amends and went on to win the next two heats. The aggregate score from the three heats awarded Leo fourth position on the grid for the pre-final, again starting from the outside.

The 12-lap pre-final was held in wet conditions which would normally suit Leo.

However, he struggled to find grip and, after a poor start, he recovered to finish fifth, which would be his starting position for the final.

The 15-lap final was held in damp conditions. Leo’s kart was set up for a drier track and Leo started poorly, dropping back to sixth position and losing some ground to the leaders. At about the half way point, Leo was able to find more grip on the drying track and he set a string of fastest laps to chase down the front pack.

Leo then made a string of passes, taking advantage of karts battling against one another within the leading group.

He moved into the lead with less than a lap to go and was able to pull a few kart lengths clear prior to the twisty final section of the lap.

Leo positioned his kart accurately and defended through the final few corners to take the title. The first five karts all crossed the line within two seconds of each other.

Leo, who qualified for the world final after his recent success at the British Karting Championships, will now represent his country in international competition in 2021.