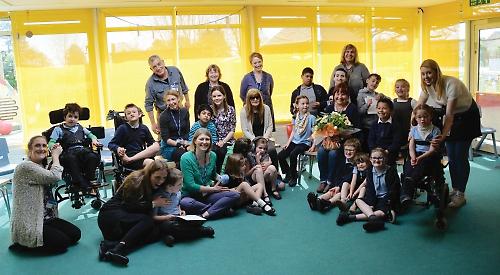 A TEACHER at Bishopswood Special School has retired after 41 years.

Judi Stacpoole, 63, had her final day at the school in Grove Road, Sonning Common, on Friday.

She was given flowers from the pupils, who cheered her during the presentation, and a basket of gifts from her colleagues.

Mrs Stacpoole, from Highmoor, said: “It has been a great honour and privilege to work with such amazing children and their families who strive to never stop giving of their best and to work with truly dedicated colleagues.”

She grew up in Norfolk and trained as a drama teacher in London before joining the old Borocourt Hospital School in Peppard in 1976, just after Oxfordshire County Council took over responsibility for the education of children with learning difficulties from the health authorities.

Young teachers were being offered additional training so Mrs Stacpoole did a postgraduate year at the University of London.

This was followed by three years working part-time at the Tavistock Clinic in London to increase her knowledge of children with emotional and behavioural difficulties.

Mrs Stacpoole said: “I worked with some children with special needs when I was in London. I realised how much I enjoyed working with them, especially when it linked to my drama and musical background. I’m very theatrical in the classroom and it helps getting the children’s attention. I use my voice to elevate things or calm the children down.”

In 1982 Mrs Stacpoole became part of Bishopswood, which had been running at Sonning Common Primary School in Grove Road since the late Seventies, when it was merged with the Mary Sheridan Unit at the old hospital.

She then led the creation of a department for Bishopswood at Chiltern Edge School in Reades Lane, helping to integrate the children and make them feel included.

Mrs Stacpoole said: “For the children in the mainstream school it raises their awareness about us all being different and having something to contribute.

“The mainstream schools always appreciate us being around because it opens their children’s eyes to accept we all have our differences but we share our humanity.”

During the Nineties Mrs Stacpoole worked as an outreach officer, supporting pupils in primary and secondary schools in South Oxfordshire.

She returned to Bishopswood in 2002, becoming team leader for the primary department. Her work has focused on increasing inclusion for the children.

Mrs Stacpoole said: “I was passionate about it. It was challenging and interesting — you can get through to the children because they can find it difficult to learn.

“It’s about finding the window and knowing the particular method and way to enable the child to learn. It’s so rewarding but can be so different for each child.

“Drama, music and performance are one way to help with that. The main thing we want to do is enable the children to have as good and happy a life as possible.”

Mrs Stacpoole will continue to help with staff training and doing consultancy work.

Otherwise she plans to spend more time in her garden and go on a cycling holiday in Holland with her husband Dickie with whom she has son, Jamie.

Mrs Stacpoole said: “Over the years I’ve had huge support from the heads, other staff and parents at the work.

“I’ve loved the job because it’s a fantastic challenge and it’s amazing to work with the children every day.

“It has given me a chance to improve children’s lives by bringing more joy and learning to it.”

Headteacher Janet Kellett said: “We wanted to say a big thank-you and give her something for working so hard here for 41 years.