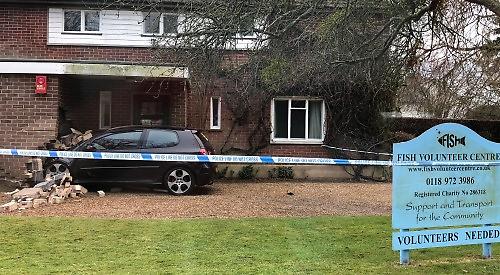 A CHARITY has been left homeless after a hit and run driver smashed into its base.

A Volkswagen Golf ploughed into the front of the Fish Volunteer Centre in Sonning Common on Friday night.

Bricks and other debris were left strewn across the driveway of the building, which is on the corner of Kidmore Lane and Kennylands Road.

The car is still embedded in the wall and a tarpaulin has been placed over it until a structural engineer is able to assess the safety of the property.

In the meantime, the part of the ground floor of the two-storey building that is used by the charity could be declared unsafe to use for three months.

The rest of the property is occupied by former village GP Peter Hemphill, 98, and his wife Jill, who own the building. The incident happened at about 9.30pm when the VW left the road as it was turning the sharp corner from Wood Lane into Kennylands Road.

Clive Mills, chairman of the charity, was called to the scene by a resident who lives opposite the building.

He said: “I couldn’t believe that someone was not badly injured as the extent of the damage is shocking.

“I also couldn’t believe that the person who did this would run away from it. I was incensed that they could not take responsibility for their actions.”

Mr Mills, of Shiplake Bottom, said the Hemphills were woken up by the noise of the collision.

“They thought there had been a gas explosion as their house shook when it happened,” he said. “They checked their gas, saw it was safe and went back to bed.

“They were not aware that this terrible thing had happened until they were made aware later on.”

The couple, who have rented the ground floor office and meeting room to the charity since 2014, are still living upstairs as that part of the property was not damaged.

The building was used as the village surgery from the Fifties until 1972 when the health centre opened in Wood Lane, where Dr Hemphill worked until his retirement in 1985.

Mr Mills said he had been working with the Hemphills’ children to arrange for insurers and loss adjusters to visit the site to establish what repairs needed to be done.

“The family are keen to help us get organised and we have a very good relationship with them,” he said.

“We are unsure what state the office is in because we are not able to get into it due to the structural state of the building and our rooms.

“The loss adjuster and structural engineer are going to decide what to do because the brickwork is being supported by the car. They are going to want to limit the amount of damage when they pull the car out.”

Mr Mills said the repairs would be covered by insurance and there would be no cost to the charity, which provides transport for the elderly.

Fish will look for a temporary base in the meantime.

Mr Mills said the new electronic booking system used by the charity meant it could be accessed remotely so Fish should be able to function as normal. Previously all appointments and plans were kept in hard copy diaries in the office.

Mr Mills said: “Had this happened a year ago, before the new system, we simply would not have been able to operate. Now I’m hoping that with the remote access we will be able to
co-ordinate our volunteers and get it all running smoothly. Any temporary office needs to be somewhere nearby so our volunteers can get there.”

The charity has 400 regular users, mostly in Sonning Common, Kidmore End and Peppard.

Mr Mills said: “We want people to be aware we will be up and running as soon as we can and doing our utmost to get reorganised.”

The charity was founded in 1979 with the aim of improving the lives of older people in the area. It was named Fish, which stands for Friendship in Sickness and Health, as that outlined the charity’s mission.

Thames Valley Police are appealing for witnesses to the crash and information abut the driver. If you can help, call 101, quoting reference 1429 22/12.