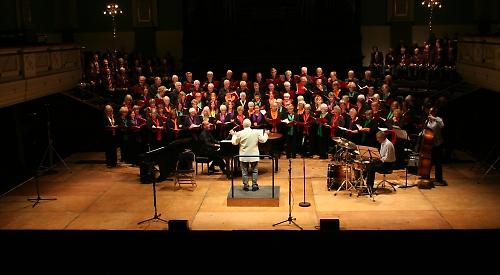 GWYN ARCH, who died peacefully at home on June 6, brought endless musical pleasure with his different choirs to audiences near and far.

He was born on April 5, 1931 in Southampton. His father, Tom, was an ordained missioner to the deaf and dumb. His mother, Laura, was a poet.

His earliest years were spent in Birmingham, with a brief period of wartime evacuation in Wales.

In 1939, the family moved to Suffolk and Gwyn attended Ipswich School, where he learned to play the piano and began to compose music.

This stood him in good stead when he was called up for National Service in 1949.

His piano playing was welcomed by his friends and proved to be a passport to as much free beer as he wanted.

In 1951, Gwyn went to Selwyn College, Cambridge, where he studied English. He spent all three years as pianist for the university jazz band and started a dance band.

He then went to Wadham College, Oxford, to study to be an English teacher and here, too, became the pianist for the jazz band.  It was also here that he met Jane, whom he married in 1957.

Gwyn’s first teaching job was at Rickmansworth Grammar School. He was able to develop many of the skills that stood him well in later life.  He ran choirs, orchestras and bands, he gave piano lessons and he took many pupils on trips across Europe.

He also wrote plays and musicals and achieved a national reputation.

Bulmershe, the new teacher training college in Reading, advertised for a director of music and, despite being an English teacher, Gwyn’s application for the post was successful.

So Gwyn and Jane and their two sons arrived in Sonning Common.

He formed the internationally successful Bulmershe Girls’ Choir and he developed the major part of his musical output, which was arrangements (more than 800) of music for choirs of different sizes, shapes and abilities.

Gwyn took very early retirement in 1985, which gave him time to continue some musical adventures that had begun at Bulmershe, including Reading Male Voice Choir and South Chiltern Choral Society and start some new ones, including Central Berkshire Girls’ Choir.

Gwyn changed the way singing was taught in schools for everyone.  Singing in schools often consisted of nothing more than practising hymns and learning traditional unison tunes from the National Songbook.

He inspired the student teachers he taught to share their love of music with their charges, as he did with them, and he composed and arranged songs, cantatas and musicals that children loved to sing.

Almost without knowing, they learned to listen to one another and to sing in harmony.

Gwyn understood that making music was much more than following notes and words on a page.

He knew that making music collectively is one of life’s great pleasures and that choral singing can help singers, and listeners, through whatever twists and turns their life’s journey takes.

Gwyn’s choirs have raised thousands of pounds for different charities. Local audiences have been introduced to music of all styles and formats thanks to his excellent arrangements and his ability to spot a new song or a new work that would give pleasure to singers and audiences alike.

What other village choirs can ring the changes between Bach’s B Minor Mass and fabulous  arrangements of George Gershwin and Cole Porter, the as South Chiltern Choral Society has done?

Most people will know that David, Gwyn and Jane’s younger son, is the band leader on the BBC’s Strictly Come Dancing.  Jonathan, their older son, is a skilled cellist, as is his daughter Lucy. David’s son, Thomas, plays guitar in bands and his daughter Jessie works on the production side in television.

Until recently, Jane sang with the South Chiltern Choir. They all survive Gwyn, whose music will live on for many years to come.

Gwyn said once that he was so grateful, when talents were being handed out, that what he got was a talent for sharing music with others. And that, above all else, is exactly what he did.