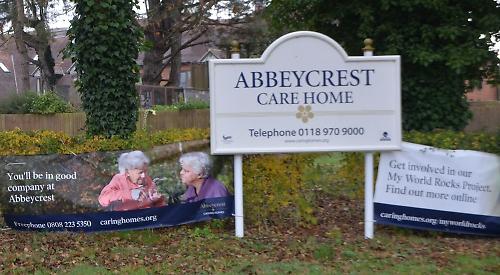 THE family of an elderly woman who died five days after falling out of bed at a nursing home have criticised the business’s management.

An inquest heard that 93-year-old Evelyn Jackson had been considered a “low” risk of falling out of bed so there were no railings to stop it happening.

She had been sleeping in a chair at the Abbeycrest care home in Sonning Common for four months as she was “terrified” that she would die if she lay down.

But after being diagnosed with pressure ulcers on her bottom she was advised to start sleeping in bed again. About two weeks later, she fell out of bed in the early hours and banged her head, causing an intracranial haemorrhage that led to her death.

Assistant coroner Sonia Hayes recorded a verdict of accidental death but said she would write to the home to express her concern about the risk assessment.

Mrs Jackson was admitted to the home in Kennylands Road on February 28 with the approval of her family. She had been living at a flat in Essex Way but suffered “cognitive decline”, Oxford Coroner’s Court heard.

Her daughter Helen Walker, one of her five children, helped prepare a care plan before her admission, which noted Mrs Jackson preferred to sleep in the recliner chair that she took with her into the home.

The plan also stated that she didn’t want to be taken to hospital in an emergency due to her fear of dying alone.

Mrs Jackson’s sleeping arrangements continued for four months until her GP and the home’s support services advised her to sleep in bed on her hips to relieve the pain from the ulcers and the staff would turn her over every hour.

The risk assessment found she was only at high risk of falling over when she was walking so no restrictive measures such as bed rails, a crash mat or a lower bed were considered.

Sonia Da Silver, manager of the home, told the inquest that bed rails should be considered “carefully” due to the risk of entanglement or a resident climbing over them.

If the risk of a fall was considered high, the home would have needed the written permission of Mrs Jackson’s family under the Deprivation of Liberty Safeguards. Ms Da Silva said: “It was recommended by the care and nursing staff that Evelyn was comfortable and not showing signs of any distress while in bed.

“It was a single bed but she was unable to turn by herself. She had to be [turned] by the staff for the pressure to be relieved and she was not able to walk at this point.

“It was a low bed and at the time the risk identified was low so we didn’t consider putting any restrictions in. It wasn’t considered necessary.

“The risks of bed rails can be dangerous if someone doesn’t like them and they try to jump or climb over them. It was noted she had significant cognitive decline but she was comfortable in bed and checked hourly.”

Ms Da Silva said that Mrs Jackson was checked by nurses three times on the night of her fall at 9.34pm, 10.19pm and 11pm.

The fall happened between midnight and 1am when she was found on the floor in the prone position by a member of staff who raised the alarm.

Nurses checked her blood pressure and temperature and concluded that she was “okay and responsive” but noticed a 1cm cut on her forehead and a small cut on her nose.

At 1.25am, the home called 999 as staff were concerned in case Mrs Jackson had suffered a head injury because she was on anticoagulants for atrial fibrillation, which can cause heavy bleeding.

Paramedics instructed staff to keep her on the floor and she was given a pillow and blanket and fell back asleep until an ambulance arrived at 6.30am.

The ambulance crew advised the home that she should be taken to hospital but her family said that would be “very distressing” for her and that she would be more comfortable remaining at the home.

Mrs Jackson was helped back into bed at about 8am.

However, the family were unhappy when they visited later that morning to see no bed rails had been installed.

Mrs Walker, who lives in Sonning Common, said: “My brother visited her at 10.30am and he was very shocked when there were no bed rails up, no crash mat and the bed was high.

“They said they were waiting for me to come in and sign a form but I was never told. If I knew there was a form I would have come in and signed it as soon as she got back into bed.

“It seems they weren’t terribly prepared. My brother insisted on signing the form there and then. The rails were eventually put up but it was too late.” Ms Da Silva, who has worked at the home for nine years and became manager in March last year, said the rails were put up once the home had the written consent of the family.

She said Mrs Jackson’s risk of falling had been only from one side of her bed but couldn’t confirm whether the bed had been against a wall or in the middle of her room.

She also couldn’t confirm whether a member of staff had been with her constantly.

Mrs Jackson died at the home five days later, June 21. The official cause of her death was an intracranial haemorrhage caused by a fall due to her frailty and age.

Mrs Walker told the inquest: “How on earth [wasn’t] she a high risk of simply moving a little bit and going over the edge and hitting her head? I don’t understand the process of her not being a risk. She was fragile for her age but the rails weren’t up. Why didn’t you put the bed rails up straight away?”

The coroner said she accepted the medical cause of death but was concerned about how the home had assessed the risk of Ms Jackson falling out of bed as “low” when she had only been observed sleeping in a chair since her admission.

She said: “I do share some of the family’s concerns about somebody who is old and frail and on these medications who has not slept in bed for many, many months that she was not considered at risk of falling.

“I do share some concerns that she was considered low risk. I’m satisfied they carried out the risk assessment but it’s not clear to me how they made that conclusion.” She said that sleeping in a recliner was “very different” to a bed and more difficult to fall out of.

Ms Hayes said the use of bed rails was a “difficult subject” as there had been cases of people being seriously injured or dying as a result of becoming entangled in them.

However, the use of bed rails in Mrs Jackson’s case did not cause her death. She added: “I know it’s always distressing to lose a loved one. I think this family was concerned about the circumstances but they do accept she was coming to the end of her life. I must stress that the use of bed rails must be properly considered.”

After the hearing, Mrs Walker said the family have been “immeasurably hurt and upset” by the circumstances of Mss Jackson’s death.

She said: “My mother’s death is not a tragedy at 93 years of age but the manner in which she died is horrific and we feel that Abbeycrest fell short in their duty of care.”

Mrs Walker said Abbeycrest had still not offered the family its condolences.

“This lack of empathy has made the death of my mother immeasurably difficult,” she said.

“I expected far better from senior management considering the calibre of home they purport to be.

“I think an acknowledgement of the difficult circumstances is what we want and maybe for them to express their regret. I don’t think we’ll get an apology.”

A spokeswoman for Abbeycrest said: “Evelyn was a much-loved member of our home community and our thoughts and sympathies are with her family.

“We regularly review and update risk assessments based on both previous history and active risk.

“In this instance, Evelyn’s physical condition required her to be repositioned in her bed by carers every few hours as she was unable to do this independently. There was no indication that her risk level should be changed.

“The health and wellbeing of residents is our absolute priority and we always endeavour to support our residents’ family members and loved ones during what is a very sad time.”