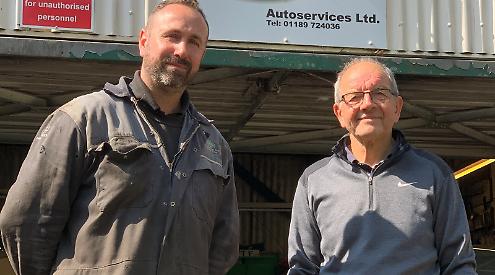 A GARAGE in Sonning Common has relocated after more than four decades.

Gary Catt, who runs the business, says his new premises, which is currently under construction, will be three times the size of the old garage so he will be able to expand and start offering MOT testing.

It will have a canteen, shower, storage room, offices and an MOT bay for the staff and a waiting area, viewing area and disabled toilet for customers.

Mr Catt had to leave the old site as the landowner wanted to sell the land for housing but found the process of finding a new site difficult.

He said: “In the beginning it was tough because there’s virtually nowhere in this village which doesn’t seem to be swallowed up by houses and no one seems to want to let land to businesses, which I think is sad.” The parish council eventually suggested Kidby’s Yard, a paddock, and the family of businessman Francis Williams, who died in 2017, sold it to him.

Developer T A Fisher objected to the move to Kidby’s Yard but residents expressed their support for the business and South Oxfordshire District Council granted planning permission.

Mr Catt, 46, said it was emotional to have to move from the place where he had worked since he was 17.

“A couple of people who taught me mechanics when I first started are sadly no longer with us, so when I closed the doors it was quite upsetting.”

Mr Catt was born in Sonning Common but moved to Surrey to be closer to his wife’s family when he was 22. He travels to the village every day for work and occasionally stays with his parents who still live there.

“I’m still a village person and I know everyone here,” he said.

Mr Catt worked in a toy shop when he was a teenager and built radio-controlled cars, which sparked his passion for mechanics.

He was 17 when he passed his driving test and enrolled at The Henley College while doing a one-day-a-week placement at Mike Farina Auto Services, with the help of his father, who knew the founder.

At 21, he obtained his qualifications and went to work at the garage full-time and was trained by Mr Farina and Maurice Painter.

He then spent 10 years working at the garage until Mr Farina retired and he took over the business.

Mr Catt said he hoped to take on three people as a result of the move, two mechanics and a receptionist. “It will be a much better working environment which should help us attract reliable people who want to stay with us long-term,” he said.

“It’ll give me more time to do what I love doing, which is salvage — that’s repairing insurance damaged vehicles to get them back on the road.

“A lot of people want to buy renovated cars because it’s a great way of getting the car of your dreams for less money.”

Mr Farina, who set up the business in 1981 and still lives in Sonning Common, said he was pleased it was remaining in the village.

He said: “All the old clients and customers we had are still coming and the business is still going and actually expanding.

“That’s all I could ask for because we started it off from nothing and I’m really pleased it’s staying.”