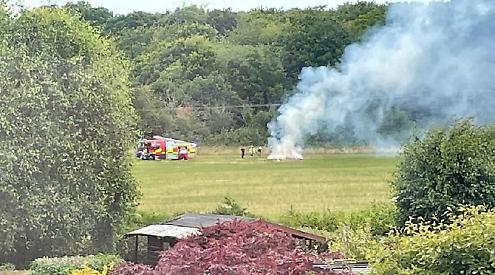 A PILE of hay bales was destroyed in a fire in Sonning Common which is thought to have been started deliberately.

The incident took place behind the skate park off Woodlands Road and Orchard Avenue at about 4.30pm on Friday.

A crew from Henley fire station was called to the scene to extinguish the blaze using a hose reel jet and hay-drags, a type of rake.

The firefighters spent more than an hour at the scene. About 15 hay bales were lost. Nearby residents witnessed the drama.

Doug Parmenter said there was CCTV footage showing half a dozen boys and two girls going into the field a few minutes before the fire started. Parish councillor Vicky Boorman said she was walking through the field when she met other villagers walking their dogs who told her they had seen children in the area.

Matthew Birkett and his daughter Serenna, eight, were on a bike ride when they helped the fire engine find the entrance to the field, which belongs to Graham Payne, of Blackmoor Farm, Sonning Common.

Mr Birkett’s wife Claire said: “We are so lucky the fire brigade attended so promptly and prevented the fire spreading.”

Kat Young, who saw the incident from her house, said: “It’s a good job the field had been cut as it could have spread very quickly.”

Anyone with any information is asked to call police on 101.