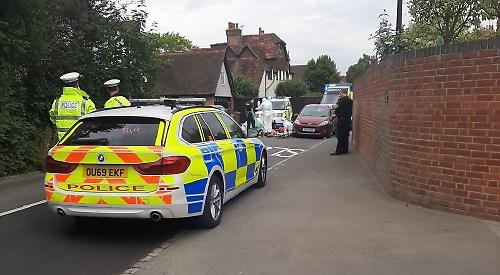 A CYCLIST died after he was involved in a collision in Sonning on Wednesday morning (June 10).

The 42-year-old man died at the scene on Thames Street (B478) where police were called to at around 7.50am.

Officers urged motorists to avoid the area on social media while the road remained closed for several hours.

The road was closed between Sonning Bridge and Sonning Farm and it is understood that two ambulances were on the scene.

Inspector Simon Hills, of the Roads Policing Unit, said: “I am appealing for witnesses to this incident, during which a man tragically died.

“I would ask that any motorists who were in the area at this time, who have dash cam footage, please review it to check if anything significant has been captured on it.”

The cyclist’s next of kin have been made aware and are being supported by specialist officers at this time.

Pat Doyle, former chair of Sonning Parish Council, lives on Thames Street and says he saw a grey Fiat 500 being taken away from the area by a low loader trailer at about 11.15am.

Anyone with information is asked to call 101, or make a report online. Quote thereference ‘URN 181 10/6’ when making any reports.

A 22-year-old woman from Reading has been arrested on suspicion of causing death by careless driving while unfit through drink or drugs. They currently remain in custody.