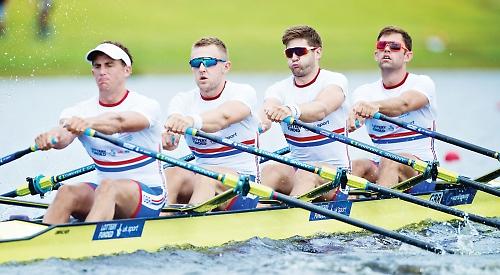 LEANDER athletes remained firmly in the hunt for medals midway through the World Championships in Florida, where good racing conditions has brought out the best in the new-look GB team.

The men’s four, stroked by Olympic champion Will Satch, got the week off to a flying start by winning their heat on the opening day of racing.

The lead GB men’s boat, backed up by Leander’s Matt Rossiter, Molesey’s Moe Sbihi, and Mat Tarrant of Oxford Brookes, led from the start in their heat and comfortably saw off Germany by 4.5 seconds.

The crew’s performance was matched by seven more Leander athletes in the quad scull and coxed pair, with Tom Barras also winning his heat of the men’s single before moving on to an impressive second place in Wednesday’s quarter-finals.

There were also second place finishes for the Tom George and Tom Jeffery in the men’s pair, and Sam Mottram in the lightweight double, where he is partnered by Jamie Copus of Oxford Brookes.

The GB women’s quad, including Leander’s Beth Bryan, Holly Nixon and Jess Leyden, with Mathilda Hodgkins-Byrne of Reading also secured an A final spot, pipping USA in a thrilling finish.

There was a convincing win by Angus Groom and Agecroft’s Graeme Thomas, competing together in their first international race for over a year. After sitting in second place for much of their heat they overhauled Italy to move into the semi-finals.

European champion Vicky Thornley followed suit, commanding her race from start to finish and eventually crossed the line over three seconds clear of her nearest rival. Leander’s Ed Fisher, racing with Edinburgh University’s Gavin Horsburgh, Peter Chambers of Oxford Brookes, and Zak Lee-Green of Agecroft in the lightweight men’s quad secured second place in their heat to move through to the semi-finals.

Both British eight crews were handed tough tests in their opening heats. The women’s eight, with six Leander athletes on board, finished in third behind New Zealand and the USA, while the GB men challenged the leading Italians throughout and eventually finished an impressive second.

The only casualty so far has been the women’s four, who failed to qualify from Wednesday’s repechages and will now contest the B final.

The newly-built course in Sarasota-Bradenton came off lightly at the hands of Hurricane Irma, and the organisers worked overtime to ensure that all the tentage and infrastructure were in place for the championships.