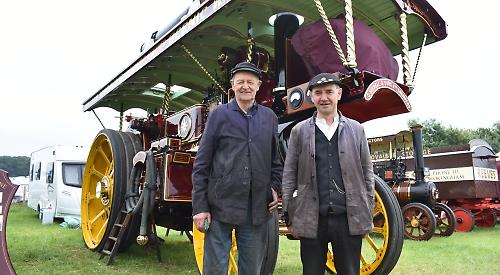 MORE than 10,000 people visited the Stoke Row Steam and Vintage Rally over the weekend.

The 38th annual event, which took place at Hill Bottom, Whitchurch Hill, on Saturday and Sunday, was a celebration of the country’s mechanical heritage.

There were also military vehicles, classic motorbikes, Land Rovers and a rally record of 84 timber tractors on display, beating last year’s total of 76.

Other attractions included classic fairground rides, an animal petting zoo, caterers and trade stands and a real ale bar. There was also a Victorian stage variety show and Morris dancing.

Live music was provided by Root’n Toot’n on Friday evening and Daniel Berry played in the beer tent on Saturday evening.

The drummers and buglers from the Oxfordshire Army Cadet Force also performed.

On both days there was a grand parade of the steam engines in the arena.

Other highlights included a fly-past by the Battle of Britain Hurricane and Spitfire aircraft and a gun salute to commemorate the centenary of the Armistice at 11am on both days. Show organiser Tony Waistell said it had been one of the most successful rallies in the show’s history.

He said: “I was very impressed with the turnout. It was very busy on both days as the weather was very kind to us. We had more than 5,000 people per day.”

He thanked members of the organising committee and other helpers, adding: “We’re already looking forward to next year.”

The rally was in aid of the Reading and West Berkshire branch of the Motor Neurone Disease Association.

Next year’s event will be held on Saturday and Sunday, June 8 and 9.