Penny Cole, actress and wife of television and film star 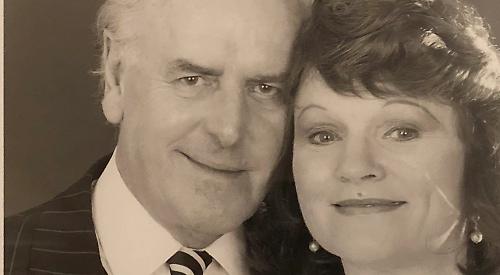 PENNY COLE, an actress and producer, who was married to fellow actor George Cole, has died, aged 81.

Penelope Margaret Ann Pennington was born on February 4, 1938 in Maidenhead to Gordon and Dorothy. Her father left when she was aged two and had no contact with her until a few years before he passed away.

Her mother liked to travel so Penny grew up all over the world, invariably being left with one friend or another and frequently having to fend for herself in parts of Asia and Africa.

Dorothy then met Roy Morrell, who was a professor of English and worked at universities in Singapore and Malaysia, and they married.

Roy brought Penny up as his own and, as a collector of Asian art and antiques, he taught her to appreciate their stories and history.

Penny studied a philosophy degree at night school when she was in her twenties and had no formal acting training.

Her first performances were in several radio plays, including Alice in Wonderland and Dear Brutus, on Radio Malaya when she was just 12.

The family then moved to Jersey and she joined a weekly rep company learning everything from stage management to acting.

Penny had a natural talent for comic acting and she appeared in many films in her twenties, including Reach for The Sky, Lucky Jim, Make Mine Mink, The Bulldog Breed and Too Hot to Handle.

On TV she worked with Benny Hill, Tommy Cooper, Morecambe and Wise and Arthur Askey while her radio work included the voice of Piglet in Winnie the Pooh with Ian Carmichael.

Penny wed at 18 but it was a short and unhappy marriage, ending in divorce on the grounds of cruelty.

In 1966, she met George, who was also recently divorced, at an auditions at the New Arts Theatre in London for a play called The Waiting Game. George later recalled: “I thought she was absolutely right for the part. Still more, however, I’m pretty sure it was love at first sight. I think I knew there and then that I would marry her. Penny’s version is that she saw me and thought I needed looking after and she found the notion quite appealing.”

Penny had brought a little blue wig box with her to the audition in case they wanted her to do the part as a blonde.

She was so fired up with adrenaline after the audition that she left the box on the number 52 bus on the way home and had to claim it back from the depot.

George never used to have lunch in those days and Penny claimed that he was thin and pale when they first met. She decided to give up lunch as well and spend time with him. It was during one of these lunchtime chats that he asked her to see a show with him and during the programme their hands became entwined.

Not long after that George took Penny to dinner at the Grand Hotel in Eastbourne where he ordered lobster followed by rice pudding.

George recalled: “I think that was probably the point when she finally thought, ‘That’s my man!’ She seemed to think that if I had the nerve to order rice pudding in such as posh restaurant, I would be prepared to take on anything.”

Penny was living in a flat in London and would drive to his home in Stoke Row, where they later lived, in her little two-seater MG sports car. She did not stay over and always drove back to London at night.

After a while, George asked Penny to marry him. He recalled: “I said, ‘You know, if we were married, you wouldn’t need to do all this driving. What about it?’.”

Penny was stunned and, without saying a word, she ran out to her car and drove off. An hour later she returned and simply said “yes” and when George asked “yes to what?” she said that she needed time to think.

They were married at Henley Registry Office on May 26, 1967. Their wedding was a small affair. The guests were actress Naomi Sim, who also lived near Stoke Row, Penny’s stepfather Roy and George’s two children. Afterwards they had a small celebration at the Olde Belle Inn at Hurley.

Penny then decided to devote her life to her family, becoming a stepmother to her husband’s two children from his first marriage, while also having their own children, Tara, who was born on May 6, 1969, and Toby, who arrived on May 9, 1971.

Penny’s mission was to create the warm, loving, stable and secure family home she had never had as a child, which was also what George was searching for.

After 12 years of marriage George secured his best-known role as the crooked car dealer Arthur Daley in the long-running TV series Minder. He played the role in 107 episodes over 11 series from 1979 to 1994 and spawned catchphrases such as “’er indoors” and “nice little earner”.

In his autobiography The World Was My Lobster, he wrote of Penny: “She selflessly put her own acting career on hold while our children were growing up to enable me to pursue my career and that was something for which I can never thank her enough.”

Once her children had grown a little, Penny began to write and produce shows at the Kenton Theatre in Henley and at the Mill at Sonning. The first ever Mrs Cole’s Music Hall was in 1979, a sold-out show at the Kenton raising funds for the Maharajah’s Well in Stoke Row. She once visited former Beatle George Harrison, who lived at Friar Park, Henley, to ask for a donation and he suggested he buy the well and put it in his garden.

Penny performed music hall shows on Richard Branson’s Catamaran Cruisers in London in 1980 and 1981. She produced, wrote and performed in the shows on the four-hour cruise that left Lambeth Pier at 7pm every Sunday. The show was a huge success and was booked by many corporate clients.

Penny had an incredible eye for detail with costumes and set design and an extensive knowledge and love of music hall numbers, particularly the saucy ones.

But she wanted to bring the shows closer to home and without having to work around the Thames tides. Soon after the opening of the Mill at Sonning, Penny brought her dinner theatre show to the venue, with Joe Brown topping the bill.

Mrs Cole’s Music Hall played successive Christmas seasons at the Mill, selling out every year from 1982 to 1985.

More recently, Penny ran a shop, Vintage Turnaround, in Henley for three years. She closed the business in 2017, saying she was “knocking on a bit”. She enjoyed her time at the shop reconnecting with many friends old and new while reigniting her love of antiques.

Penny had been fighting an autoimmune condition but lost her battle at the Royal Berkshire Hospital in Reading on January 3.

Her husband died in 2015, aged 90. She is survived by her children Tara and Toby and her grandchildren Harry, Amelia and Thomas.

The funeral will take place at Reading Crematorium on Wednesday, January 22, at 10.45am.

All are welcome to attend but the family asks that everyone wears some colour and no flowers but please plant something in Penny’s memory. Her garden was very important to her and she loved to be given living plants that she could add to it.