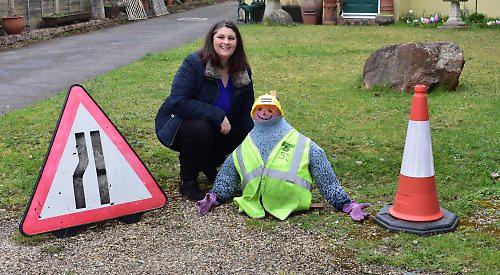 A SCARECROW trail has been set up in Stoke Row to raise money for the village school.

Pupils and residents have made 20 different characters to display outside their homes, including a builder, a fisherman, an Oompa Loompa from Charlie and the Chocolate Factory and a Mr Men figure.

There is even a coronavirus- themed figure with a face mask and a pack of Corona beer.

The trail was organised by the Friends of Stoke Row School, who have produced a map to help families find the different displays.

There is also a rhyming quiz, written by David Lowe, a school parent, with prizes of three Easter eggs for those who complete it.  The maps cost £2.50 each and the proceeds will go to the primary school in School Lane.

Emma Taylor, who chairs the Friends group, said they had to be inventive when it came to fundraising because of the coronavirus lockdown.  She said: “We did an elephant trail a few weeks ago and that worked well. The children from the school coloured in pictures of elephants and we stuck them around the village.

“Somebody suggested we do a scarecrow trail as we couldn’t do our usual school fete. We thought 10 would be good but we’ve ended up with double that.”

Parent Karen Dougherty, who made six of the scarecrows, said: “We asked for clothes donations and we provided straw to people who were making scarecrows.  A lot of people just went with whatever they had at home.”

Those who couldn’t build a scarecrow offered to host them in their gardens.

The trail, which will be in place until Sunday, was supported by Stoke Row Parish Council, the Cherry Tree Inn, Stoke Row Stores, Stoke Row Chapel and the Maharajah’s Well Trust.

Maps can be bought from the stores in Main Street or by using an honesty box near Maharajah's Well.