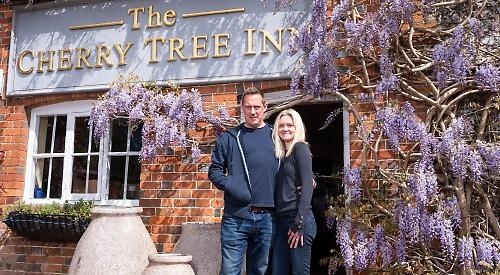 A PUB in Stoke Row has been presented with an award.

The Cherry Tree Inn was named best boutique restaurant in Oxfordshire at the Corporate Livewire’s Prestige Awards, which celebrate small and medium-sized businesses.

Dan and Natalie Redfern, who have run the pub since April 2018, received the award at a ceremony at the Oxfordshire Golf Hotel in Milton Common.

The pub was nominated anonymously by a customer and then chosen as the winner based on positive reviews and its strong social media presence.

Mr Redfern said: “It means the world to win an award. It’s recognition of a lot of hard work from our team and the quality of the food and service.

“The food is homemade and a lot of it is home-grown. We have some of the best suppliers in the country and many are local, whether it’s meat, fish or coffee.”

The Cherry Tree underwent changes to comply with the restrictions of the pandemic, including the introduction of a marquee in the garden and a new library and IT hub.

Mr Redfern hopes to keep the marquee as a permanent feature but is keen to respect the conservation area and the opinions of local residents.

He added: “We are allowed it for now and the Government have talked about relaxing the rules to make life easier for the hospitality industry. I’m hoping they stick by that and enable us to do well.

“We’ve just had another increase in our electricity costs heading into the winter, so we will need extra support.”