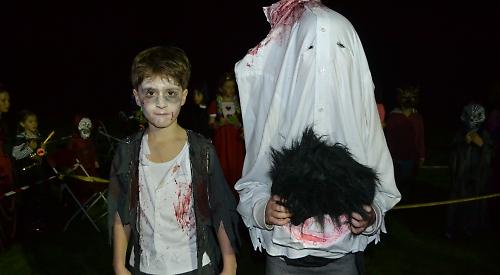 John and James Robb, from Shepherds Green, were among hundreds of families who attended the 25th event at the charity’s Nettlebed hospice on Saturday evening.

Scores of children went dressed and made up as vampires, witches, skeletons and ghouls for the competition, which preceded the display.

They had to parade around enclosures while Sue Ryder fund-raisers judged the best costumes.

Their mother Jo said: “I can’t believe they’ve both won! John didn’t have anything else to wear so I said let’s get an old bed sheet.”

James said: “I do really like zombies and I got this outfit online. It was very expensive!”

The winner in the under six girls’ category was Amie Wood, three, from Caversham, who was dressed as an alien fairy with flashing tentacles on her head.

Her mother Bav said: “She insisted on wearing her green fairy outfit so we added the tentacles. It was all her idea — I was asking her to put on another outfit!”

Amie, who attends the Chiltern Day Nursery in Caversham, won an Elsa teddy bear from the film Frozen.

Mrs Wood said: “It was in her bed all night and she has taken it into nursery to show off.”

The winner in the six and over girls’ category was Penny White, seven, from Henley, who was dressed as a headless horseman and also won a doll.

Penny, whose four-year-old sister Lois, also took part, said: “We have a book with lots of costume ideas and when I saw this I wanted to do it. I made it myself with help from my mum. I’ve been here a few times before and I always dress up.”

The main event, which is organised by Sue Ryder with help from the Reading Abbey Rotary Club, featured a giant bonfire in the the grounds of the hospice at Joyce Grove and was compèred by Shiplake singer Vince Hill.

There were stalls selling hot food and drink, Halloween costumes, fairground games and a tombola while the Fiesta Steel Band performed songs including The Final Countdown by Europe and Take On Me by A-Ha.

Cllr Hinton said: “We enjoyed eating fondue from Nettlebed Creamery and won a few times on the tombola. I absolutely loved the fireworks — what a fantastic display. I hope they raised lots of money as it was a thoroughly enjoyable evening for a worthy cause.” Tracey Hancock, head of fund-raising, said: “A huge thank-you to all the people who volunteered and attended our fireworks night.

“A particular thank you to our sponsors Invesco Perpetual and the Rotary Club of Reading Abbey and Brakspear, who supported the event, as well as our guest host Vince Hill.

“We had such a brilliant time celebrating the 25th anniversary of this much-loved local event This is one of our biggest fund-raising events of the year and we are so grateful for the support of the community.”

Many drivers were caught up in queues leaving the hospice after the event and some cars had to be pushed out of mud after the makeshift car park was cut up due to the large numbers of visitors.

The numbers were up due to the cancellation of the Round Table fireworks display at Swiss Farm in Henley due to the group folding.