My dip a day for one year 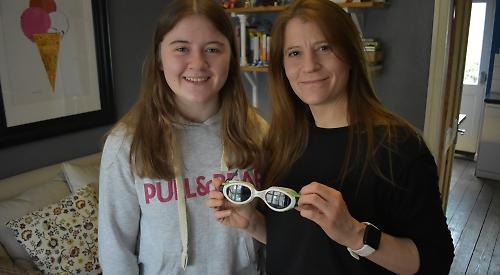 A WOMAN from Henley is undertaking an open water swim every day for a year.

Kate Goodman, 42, says this has helped conquer her fear of water which used to cause her panic attacks.

She is currently almost half way through her challenge, having started on August 25 last year.

During the winter she has had to swim in water just above freezing and often during darkness.

Mrs Goodman, who lives in Farm Road with her two teenage children, joined the Henley Open Water Swimming Club in the summer of 2017.

But soon afterwards she started having panic attacks when getting into the River Thames.

She said: “I was doing little swims on Saturday mornings with the club. It was something I never really considered doing before. I had only really swam on holiday before, in the sea, and occasionally in a pool.

“My first swim in Henley I had a panic attack and I had to get out on the side and calm myself down.

“It was just unusual — I’d never had a panic attack before so I didn’t know what it was.” Last April she went on a 10km training camp in Majorca which helped her combat her fear.

Mrs Goodman said: “The talk about mental barriers got me thinking that it was all in my head these panic attacks.

“It’s quite common — people don’t like the dark water and things brushing past your legs.”

In July she swam 3km in the Arctic with the swimming club but was still suffering the attacks so she set herself the 365-day
challenge.

Since then she has swum in Loch Lomond in Scotland and the River Eden in Carlisle as well as in Hampstead Ponds and a lake in Wandsworth in London.

On Tuesday she travelled to Brighton to swim in the sea but one of her favourite spots is in the Thames at the bottom of Ferry Lane, near the Flower Pot pub.

She swims various distances depending on the water temperature wearing just a swimsuit.

Mrs Goodman said: “In August when I started I had swum eight days in a row and thought it would be a shame to lose that streak and that’s when the idea came to do it every day and get rid of this fear.

“Now the panic attacks have gone. I’m not sure when I became aware of it but I haven’t had one for a long time. Probably in the Arctic was the last time.

“As the water gets colder in winter you have got other things to worry about. The fact that it’s one degree is enough of a challenge!

“Confronting my fears, being aware of them and doing it anyway seems to have had the desired effect.”

Mrs Goodman, a student paramedic with London Ambulance Service, said that because she works long shifts, many of her swims during December and January were in darkness.

“I didn’t think I could do it because of my work schedule — I don’t think I swam in daylight Monday to Friday at all in January.

“It’s a mental challenge. When it’s cold and dark the last thing you want to do is get into the water. The sun hasn’t come up and you’re walking alongside the river in a swimming costume ready to jump in.

“When the water is below three degrees you don’t want to be in for more than five minutes so you swim as far you can swim in that time, probably 300 metres.

“Your hands start to hurt and there is pain in your fingers. If it’s really cold it feels like lots and lots of little paper cuts.

“However, the unpleasantness lasts only a few seconds and then it’s really exhilarating.

“When people see me getting out of the water they feel compelled to say something. People wearing hats, scarves and gloves say, ‘Is it cold in there?’

“The distances will grow as it gets warmer and lighter. It was much warmer this week so I’ve been swimming 500 to 600 metres. It can only get easier.”

Mrs Goodman, who also regularly goes running along the river, has failed to persuade her daughter Elizabeth, 19, and son Archie, 17, to join her even once.

“Even the dog has refused to go in,” she said.

She will have a party to celebrate finishing in August.

“Facing your fears and doing it is very empowering,” she said. “It definitely feels like an achievement.

“I feel fantastic but I don’t think anyone is looking forward to spring more than me!”