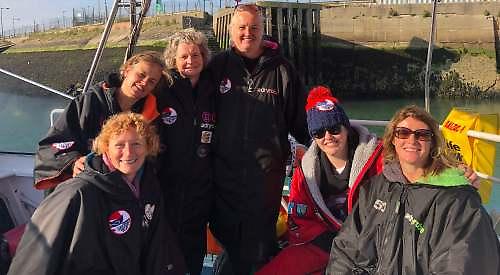 SIX women who attempted to swim the Channel in relay for a Henley charity had to stop halfway due to bad weather, writes Gee Harland.

The Thames Marvels were about 10 hours into the 21-mile swim from Dover to France but had only managed to complete about 10-and-a-half miles due to the strong tides.

Marika Perkins, Alaine Berry, Rebecca Bell, Vicky Elson-Smith, Elizabeth Hayes and Lee Saudan, named “Marvels” from the first initials of their names, set off just after 6.30am on Friday July 9 after training for a year.

Each woman, five of which are members of the Henley Open Water Swimming Club, had swum one-hour legs each in 20-25mph winds.

Their pilot, Eddie Spelling, made the call to end the journey early and the women returned to Dover.

Despite this, the group managed to raise £12,281 for the Charlie Waller Memorial Trust, a charity established in 1997 in memory of Charlie Waller, who took his own life while suffering from depression when he was 28.

Mrs Saudan, 54, from Nuffield, said the group was “completely devastated” but they are grateful for everyone’s support and the fundraising was a “massive effort”.

She said: “I was the first in the water and once we got past the protection of the harbour things got really choppy.

“I quite like a bit of a rough sea but I started to go through the swimmers going after me and thinking about how they would feel with that level of choppiness as not many of us had that experience.

“We were being thrown around the boat and we couldn’t stand up properly and we came away with so many bruises.

“We couldn’t see either coastline, which was quite disorientating. We were swimming into the wind and waves were just crashing over us. It was like being a sock in a washing machine.

“It was exhausting and the forecast wasn’t improving. Everyone was very upset as we had trained for a year throughout covid and the lockdown and just being able to get ourselves ready to be on that boat was a difficult challenge on top of our own mental health challenges.

“But we’ve made some lifelong friendships and learnt so much about each other and ourselves and it just shows that at the end of the day it doesn’t matter how much preparation you’ve done if the weather gods are against you.”

Mrs Bell, 56, a soprano singer from Peppard, said the sea was “so rough” it was pushing her to and from the boat. She said: “I was away from the boat one minute and right up against it the next. I was trying to find a safe place to tuck in next to the side so the waves weren’t so fierce but it didn’t work.

“The changeovers were also tricky with the boat rocking and rolling and trying to get on to the swaying ladder was a skill I very quickly acquired.

“Although it was rough and raw and I was terribly seasick, I wouldn’t have missed this experience for the world.”

Mrs Hayes, 56, from Milton Keynes, added that despite the weather being “tough going” she enjoyed it. “The highlight for me was swimming with hundreds of beautiful tiny jellyfish,” she said. “It made my second swim more interesting especially as I knew they were not dangerous ones.”

Mrs Saudan concluded that the Channel swim is “unfinished business” for the group and they aren’t ruling out another attempt completely just yet.

“We finished with brilliant times,” said Mrs Saudan. “That’s what the team needed and the weather was beautiful.”