Church's 21st snowdrop festival gets off to a... snowy start 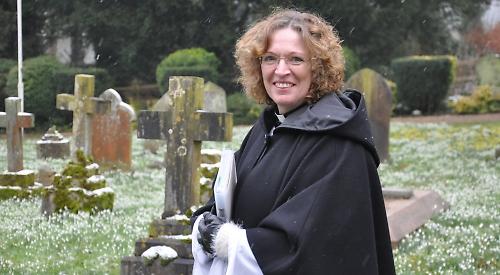 SNOW fell at the start of the 21st annual snowdrop teas to be held at St Botolph’s Church in Swyncombe.

Dozens of people visited the Norman church on Saturday and Sunday to see the carpet of white flowers in the graveyard and then enjoyed tea and cakes.

The flowering bulbs were blessed by associate priest Rev Angie Paterson on Saturday.

Volunteer John Sennett, of Pyrton Lane, Watlington, said: “The huge commitment that the baking and jam-making fraternity from Swyncombe, Upperton, Nettlebed, Cookley Green, Maidensgrove and Park Corner put into the first weekend will be a very hard act to follow.

“They suffered from biting cold and snow flurries but the hardy people from many parts of South Oxfordshire were tempted by the warmest of welcomes and even visiting dogs were entranced by the carpet of ‘candlemas bells’ and all enjoyed the bracing walk that the Ridgeway offers. Sometimes it was difficult to tell the snowdrops from the clumps of real snow and the 400 new snowdrops planted last year on the south side of the church — away from the road — showed some promise upon their first ‘outing’.”

Visitors were also be able to buy snowdrops grown by members of the congregation and about raised £1,400 was raised.

The event will be repeated this weekend and again on Saturday and Sunday, February 25 and 26, from 2pm until 4pm. There will also be a choral evensong at 4.30pm on Sunday.

The proceeds will go towards a permanent washroom, the church’s running costs and a number of charities. Last year, £4,200 was raised over the three weekends.