Apollo expert is boldly going - to the cinema 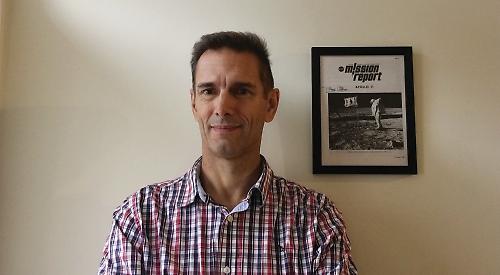 IT’S nearly 50 years since man first walked on the moon, but it’s safe to say it’s an achievement that will never be forgotten.

The release of Damien Chazelle’s film First Man earlier this month — following Neil Armstrong’s journey from NASA test pilot to commander of the Apollo 11 mission — has served as a timely reminder of the landmark achievements of half a century ago.

As well as showing First Man, which stars Ryan Gosling as Armstrong, Henley’s Regal Picturehouse cinema has devoted its current series of “Vintage Sundays” screenings to films set in outer space including The Right Stuff, Alien and the original Solaris.

This Sunday (October 28) at 4.15pm, the Boroma Way cinema is screening Apollo 13 — Ron Howard’s Oscar-winning 1995 dramatisation of the April 1970 moon mission that grabbed the attention of the world.

As many will recall, this was because it was the Apollo mission that came closest to disaster, although it was eventually to be acclaimed as NASA’s finest hour.

Following an explosion the astronauts were forced to shut down the command module and power up the lunar module to use as a “lifeboat” for their now highly perilous voyage home.

Sunday’s screening of the film, which stars Tom Hanks as mission commander Jim Lovell, with Kevin Bacon as Jack Swigert and Bill Paxton as lunar module pilot Fred Haise, will be made extra special thanks to the contribution of Henley-based Apollo space programme enthusiast and collector, Dr Michael Warner.

Starting at 4pm, he will be giving a series of talks in the cinema’s upstairs alcove, where a number of NASA artefacts will be on display.

Dr Warner is the former head coach of junior triathlon club Tri Henley and until April last year he also ran procurement specialists Local Content Solutions from offices in Queen Street, with the business subsequently being acquired by international development giants DAI Europe for whom he is a director.

In 2012 he embarked on what he now refers to as a “rather expensive hobby” after he read a magazine article saying US president Barack Obama had signed a bill into law that confirmed NASA astronauts and other spaceflight pioneers as the owners of the various parts and equipments they had saved as souvenirs from their missions. “I came across that article and I just thought ‘wow’ — I had no idea that you could purchase something that had gone around the moon.”

As a five-year-old schoolboy at the time, he retains clear memories of watching the July 1969 moon landings on TV.

Dr Warner says: “It’s about one of my earliest ever memories, because I would have been five and a half years old. I remember very vividly all of us kids in primary school being called into the main hall to watch it.

“The television set in question was an old-fashioned wooden cabinet with four legs and I remember thinking that the set looked like the lunar module!”

Since then, Dr Warner, now 54, has developed his interest in the Apollo missions and become a collector. He has given talks at Gillotts School, the Geological Society of London, the British Interplanetary Society, the Science Museum and the Centre for Planetary Science at University College London. But what prompted him to approach the Regal Picturehouse cinema?

Dr Warner says: “The new film coming out, First Man, is the story of Neil Armstrong and I knew next July is the 50th anniversary. I’ve had a bit of a lull for two years on doing these presentations because of selling the company so I thought it was time to get the circus back on the road — so I started thinking how can I contribute to this 50th anniversary?

“On Sunday it’s not just Apollo 13 that’s showing, it’s First Man as well. They’re both going to be showing that day, so for me it was obvious — it was an alignment with the stars, metaphorically and literally.

“We’re going to have the whole of the top alcove set up as an exhibition and people will be able to come and see the artefacts and hear some of the stories about them and listen to some of the NASA audio archives that relate to them.”

One of the artefacts on display will be Dr Warner’s most recent acquisition at auction — the lunar module contingency checklist used by Charlie Duke, the back-up lunar module pilot on the ground at Houston mission control.

What makes this document particularly fascinating to collectors is that in the heat of trying to save the lives of the Apollo 13 crew it has been, as Dr Warner puts it, “frantically annotated” with rapidly improvised and revised procedures that were then radioed up to the stricken astronauts.

“For me, it’s not just buying an artefact at auction and then staring at it in a perspex box,” says Dr Warner. “It’s about doing the research on the artefacts and finding the NASA archives’ audio and transcripts and then bringing the artefacts to life.”

By way of an encore next summer, Dr Warner is planning a six-week exhibition in the River & Rowing Museum’s community gallery — full details of which will be confirmed nearer the time.

• For more information and to book tickets for Sunday’s Apollo 13 and First Man screenings, visit www.picturehouses.com