Bionic arm made by 3D printer has inspired my new business 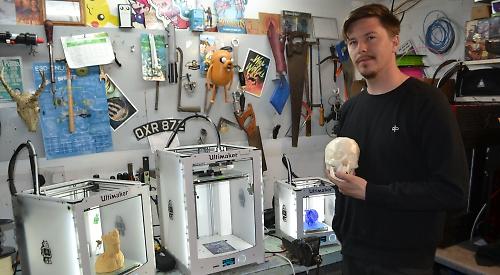 A MAN has started his own 3D printing business after being inspired by his bionic prosthetic arm, which was made by one of the machines.

Dan Melville, who lives near Wargrave, makes bespoke designs to order as well as running workshops for youngsters.

The 27-year-old was born without a right hand and tried several different prosthetics when he was younger but says they all made him “feel negative”.

This changed about three years ago when he was given a printed prostethic called the Hero Arm, complete with moving fingers which allow him to grip and hold things.

Mr Melville said: “Having only a left hand never stopped me giving everything a try and I always found my own way of doing things.

“Small tasks such as opening a bottle of water or holding two items at the same time may not sound difficult but for someone with one hand it’s the simplest things that can be the biggest obstacle.”

The arm was made by Open Bionics, a UK company which builds low-cost bionic arms for people with disabilities. Mr Melville, who lives with his girlfriend Harriet Wigmore-Welsh and grandmother Joyce Pearson, said: “I got in touch through their kickstarter programme called ‘low-cost 3D printed arm’ as it really interested me.

“Harriet said I should ask if they were looking for a tester and the rest is history.”

He has worked with the company, appearing on television and at events around the world to demonstrate how the arm works.

Mr Melville said: “The arm uses pulses in my muscles to determine if I want to open or close it.

“I have a button on the hand that changes the grip pattern, which can help me with picking up the most dexterous items to much bigger and heavier objects.

“The arm has made some difference to my life but I am most proud of the work I have done with Open Bionics, which means future generations will be able to access affordable bionic arms.”

Mr Meville, who used to work at the Waitrose store in Twyford, saved up £1,500 to buy his first 3D printer and make his own designs. Now he has seven printers in his workshop at home in order to meet a growing number of orders from customers who know him as “Handy Dan”.

He said he had always liked creating things as one of his grandfathers was an optical mechanic and the other was a carpenter.

He said: “After seeing a 3D printer I decided this is what I wanted to do. Not only did I want to wear a bionic arm, I wanted to understand how it works.

“I saved up my wages at Waitrose and bought my first printer. I trashed it because I used it so much.”

Mr Melville said he had been “obsessed” with 3D printing and saved up to buy another one. He also won one in a competition and was given another.

The machines, which cost between £1,000 and £2,500, use computer-controlled arms to layer melted plastic filament and form three-dimensional objects.

The design can be uploaded on a memory card and the printer will gradually create the physical object over a period of several hours.

Mr Melville also has a smaller mobile printer which he uses for demonstrations and workshops, when he is helped by Miss
Wigmore-Welsh, a professional dog walker.

One workshop took place at the Museum of English Rural Life in Reading.

He said: “The kids walked around the museum, found their favourite thing and drew it. Then I came back later with their printed doodles.

“There’s just not enough out there to teach kids and families about 3D printing. I fell in love with the whole concept.

“Teaching kids what they can make themselves is pretty awesome. I can turn their doodles into presents for them. It’s making something personalised that they can keep.”

Mr Melville is supported by the Prince’s Trust, a youth charity that helps young people get into jobs, education and training.

He said: “I had no idea how to start a business and the trust were great for guidance. They taught me how to run a business and be more financially stable.

“I really want to get out there and get more out of it.”

Mr Melville makes bespoke items to order, including vases, models of TV characters and outfits for fantasy costume events. He has also made skulls, masks and a detailed bust of the character Groot from superhero film Guardians of the Galaxy.

He said: “With a 3D printer you can make anything and everything. These days you have printers building houses and furniture. I’m just a small part of that.

“I love making bespoke items. Kids have been hearing about 3D printers for most of their lives but most haven’t seen one in action. Seeing their eyes light up makes my day.

“I want to get more people engaged. I want to show that 3D printing is creative and fun.

“In the near future everyone will have a 3D printer in their home but we need to teach people. I’ve heard that a lot of schools have printers but don’t always know how to use them.

“There are plenty of excellent ideas for designs that can be made on a 3D printer. The only downside is the time it takes. One vase took me 24 hours to print.

“I’ve only been around for a year so I want to get my name out there and do more workshops.”