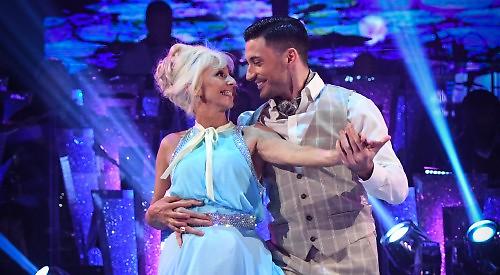 The radio presenter, who lives in Wargrave, was the first to go through to the third round following an “effortless” performance of the Viennese waltz that impressed the judges and the voting public.

The 58-year-old widow of magician Paul Daniels, who is the competition’s oldest contestant, took to the stage in a flowing, calf-length pale blue dress with her professional dance partner Giovanni Pernice and performed a routine to She’s Always A Woman by Billy Joel.

They were awarded 34 points out of a possible 40 on top of the 30 they earned in the previous week’s show, when they performed the Paso Doble, and leapfrogged the previous leaders, JLS star Aston Merrygold and Janette Marara.

The routine ended with the pair in a close embrace and was praised by presenter Tess Daly, who told McGee: “Debbie, you’ve worked your magic again — you’re so graceful.”

The judges praised the pair too. Darcey Bussell said: “You showed no effort and it’s all in the detail. In anything, you don’t want to show that it’s difficult and [your] extension, your arms and your posture just ooze grace. It’s rare to see that in the second week.”

Shirley Ballas said: “It was absolutely beautiful. Giovanni, you have such respect for this lady and it shows when you dance. She’s just like a beautiful English rose.”

Bruno Tonioli said: “It was so graceful and fluid — you couldn’t look any lovelier, my dear Debbie.”

She replied: “Wake me up, I’m in a dream!” Earlier in the week, McGee and Pernice were filmed preparing for the BBC show in McGee’s garden on the banks of the River Thames.

She took her partner out on a trip in her boat, The Lovely Debbie McGee, and allowed him to drive it while wearing a captain’s hat.

On her weekly show on BBC Radio Berkshire on Sunday, she said: “I’m wide awake, although my voice might sound a little bit deeper and that’s just a little bit of tiredness creeping in. I’m still on a Strictly roll and the adrenaline is keeping me going.

“I had a lovely week training. We could only rehearse in the afternoons because every morning we were filming different things or doing photoshoots.

“On Monday morning, Giovanni rehearses with the professional dancers and I’m in awe of them because they work so hard.

“They get to sleep in on Sundays but they all have to choreograph the dances for whoever gets through and on Mondays they rehearse for their big group numbers. They meet their partners in the afternoon but don’t have time for lunch unless they grab it en route.

“I trained every afternoon last week and loved doing the Viennese waltz.

“Thank you to everyone for all the hundreds of lovely messages I’ve received.”

She said the dance was much harder than the Paso Doble because it required great flexibility and she knew the judges would be scrutinising her performance more closely.

She said: “The most important thing is that you hold your head back and bend your back from the shoulders.

“When we first started learning it, I thought I’d never master the position because I’m older so my back is stiffer and it hurt so much. Every night I came home and soaked in the bath, then lay in bed with my shoulders on a massager while writing my Strictly diary.

“It became bearable after a few days but at first my back hurt, my knees hurt and it was quite uncomfortable.”

McGee said she initially struggled to assume the correct posture by bending her knees so Pernice suggested rehearsing while balancing a banana on her head.

She said: “It was like a model learning to walk by balancing a book on her head except we didn’t have any books. I kept giggling as having my knees bent and slightly open made me look like a chimpanzee.

“Giovanni said I should just get my posture right and not worry about my feet as they would be covered by a long dress and the judges wouldn’t see them.

“But when I picked up my dress on Friday, they said they’d considered a long dress but didn’t want me to be swamped. It came up to my shins so the judges would see everything and I had a little panic.

“I was waltzing up and down outside my dressing room making sure I got my feet right but, yes, I got through it.”