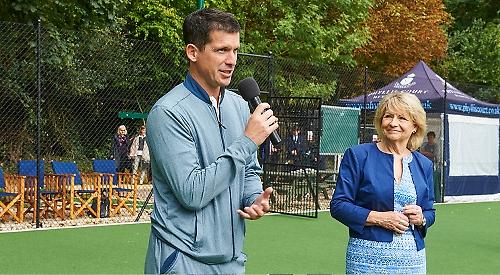 The former British number one conducted the unveiling at the private members' club on Saturday.

Henman, 43, said: "I’m delighted to come to Phyllis Court Club today to recognise the opening of these new tennis courts.

“I’m always happy to support new facilities in the area and hope this will attract members and new members to start to play tennis or rekindle an interest they have had in the past."

The new courts were relocated to make way for a new fitness centre, which was granted planning permission in July.

Each of the courts has a state-of-the-art soft and durable surface. Its specialist fibre construction provides increased cushioning underfoot and a consistent ball bounce.

Patricia Christmas, the club's chairman, said: "How pleased we are to host Tim at Phyllis Court to open our wonderful new tennis courts, not only do they look good but our tennis members are saying how good they are to play on.

"I am delighted to confirm this is the completion of phase one of our fitness centre development and we are excited to have added these high quality courts to all the other facilities we have at Phyllis Court Club."

The fitness centre, which will include a swimming pool, gym, exercise studio, treatment rooms and changing rooms should be completed next year.

It is hoped the new facility will boost membership numbers from about 2,890 members now to 3,250 over the next three years.