After years of waiting, school opens at new site 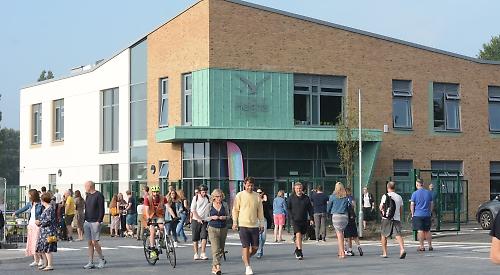 CHILDREN and staff celebrated the first day at their new primary school after years of waiting.

The Heights School opened at its new site at Mapledurham playing fields, off Upper Woodcote Road, Caversham Heights, when the new term began on Monday.

It had been based at temporary premises in Gosbrook Road, Lower Caversham, since it first opened in 2014.

After the children had arrived with their parents for their first day, an official opening ceremony took place, overseen by headteacher Karen Edwards. The Mayor of Reading David Stevens cut a ribbon to mark the occasion.

Mrs Edwards, a former headteacher of Sacred Heart Primary School in Henley, said: “It feels quite surreal but incredibly exciting.

“It is very special to finally get here after a huge amount of time and effort from so many people. It has been an incredible journey.

“I don’t think the children knew they were on a temporary site and it was the parents who felt it more.

“We used to have to walk across the road to Christchurch Meadows for our PE lessons and just had to get on with it.

“We pride ourselves on being solution-focused. We have been hit with delays and changes but they were all out of our control, so there was no point dwelling on them. We’ve adapted every step of the way.

“With covid, it has been like a military operation and our parents have been incredibly supportive and understanding. I’ve made so many promises and that’s really hard but they have put all their trust in me.”

Seven years ago, the school began with 61 pupils across reception and year one. Now it has about 350 children going up to year 6.

The school had to add temporary buildings to its site in order to cope with its expansion.

It was hoped that the new site would be ready in two years but there was a series of delays and controversy over the chosen site.

Reading Borough Council, which is a trustee of the playing fields, carried out a public consultation on five possible sites for the new school.

The others were High Ridge in Upper Warren Avenue, the Albert Road recreation ground, land at Dyson’s Wood Farm, off Kidmore Road, Caversham Heights, and Bugs Bottom, a large green space off the Hunters Chase development.

More than 70 per cent of respondents chose Mapledurham playing fields.

Opponents said building the school there would increase congestion and also claimed it would breach a covenant put in place when the land was gifted to the community for leisure purposes by Charles Hewett in 1938. The Education Funding Agency offered £1.36 million to improve leisure facilities on the playing fields in return for a lease on 1.2 acres of the 25 acres for the school and the council agreed.

The building work by Keir Construction finally got under way in March 2019 but was then delayed by the coronavirus pandemic.

The pavilion has been refurbished after falling into disrepair, the playing fields have been improved and the playground moved and upgraded.

The school’s new multi-use games area and hall will be available for community use.

Mrs Edwards said the school staff and parents had done well to manage both the delays and the concerns of the community.

She said: “In many ways, I think the delays have helped us. We have a lot of children with a range of different needs and at our temporary building the walls would literally move and it was noisy.

“Here, every fitting and room size has been chosen to ensure it is neutral and really calm.

“There is limited outside space but we look at the space we have and it is really special. The shame is the reception children from seven years ago didn’t get to be a part of it.

“We can’t wait to welcome local residents. We’re going to be a hub for the community. Change is difficult and it takes a while to adjust but we want to give and contribute.”

Tom Sheppard, of Woodcote Way, who has four children at the school, said: “The space is just incredible — it is so much bigger. The view over the playing fields is fantastic.

“One of the biggest things for us is being able to walk rather than having to get in the car.

“We stepped out of our door this morning and there was a stream of children in red and blue coming down the road. It was a lovely sight and it is nice to see them in their local community rather than traipsing through central Caversham across busy roads. This is how it should be.”

Nick Walden, chairman of governors, said: “It’s like the first day of a new challenge.

“When I first became involved in this we were supposed to be moving in two years after we opened.

“One of the other real challenges was not knowing when we were moving. We started with one unit that was one-storey high and ended up with two units that were two storeys. That in itself provided challenges of expanding the school each year. Now everyone here is up for the next chapter in our history.”