Howzat! Teenage cricketer achieves all As in GCSEs she took just weeks after leaving American hospital 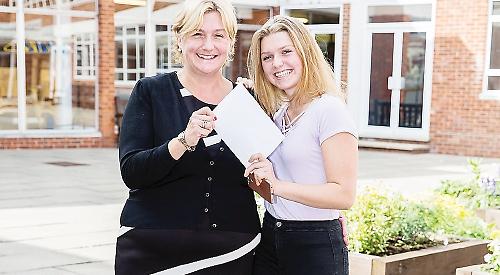 A TEENAGE girl from Henley passed her GCSEs with flying colours despite taking the exams just weeks after being in an American hospital.

Romilly Hayward, 16, was among the top performers at Queen Anne’s School for girls in Caversham.

All the independent schools in the Henley area recorded excellent sets of results, comfortably performing above the national average.

Some opted to stick with the traditional A* to C grades in English and maths rather than move over to the new 1 to 9 grade format.

The new system, which aims to provide more differentiation among higher-achieving students, ranks the higher grade as the higher numerical figures.

It has only been introduced for English language, English literature and maths so far but other subjects will adopt the system next year.

Romilly achieved nine A*s and two A grades as well as the maximum 9 in English literature and an 8 in English language under the new marking system.

Romilly, who plays for Henley Cricket Club and for Berkshire, fell ill while on holiday with her family in the Caribbean during the Easter school holidays in April.

She had to be flown to Miami for treatment as there was no hospital on the island. She remained in hospital for three weeks recovering, studying when she felt well enough, before returning to the UK just before her exams.

Romilly said: “As soon as I got back to the UK I had amazing help from the school and support from my closest friends. I’m over the moon with how I have done after everything that happened.”

Romilly, who will be studying for her A-levels at Queen Anne’s, added: “I’m really hoping to go to Oxford to study medicine.”

The pass rate at Queen Anne’s was 100 per cent with 55 per cent of passes being A* or A grade.

The proportion of A*s was 27 per cent, down one percentage point on last year, while the number of A* to B grades was 81 per cent.

Ninety-eight per cent of grades were A* to C, the same as last year.

Eight year 10 girls took iGCSE music a year early and achieved five A*s, two A grades and a B between them.

She was jointly awarded the Botting Prize at the school’s speech day for her commitment and performance in sports. She has been selected to represent the regional Greater London lacrosse team.

Philippa Mundy, from Kidmore End, attained two A*s, four A grades and an 8 and a 7. She will study economics, English literature and geography at A-level.

Elouise Underwood, from Henley, acheived seven A*s, two A grades and two 6s. She will study biology, chemistry, maths and psychology for her A-levels.

Alexandra Griffin, from Caversham, achieved seven A*s, two A grades and a 9 in English literature. She shared the Botting Prize with Abigail for her sporting prowess in netball and lacrosse.

Bianca Buencamino, from Caversham, was awarded seven A*s, two A grades, and a 7 and a 6.She will study biology, chemistry and mathss at A-level.

Aoife Madeley, from Caversham, achieved six A grades, two Bs and a 9 and an 8 and will study English, French and philosophy at A-level. She is an aspiring blogger, who featured at London Fashion Week.

Queen Anne’s headmistress Julia Harrington said: “Congratulations to all the girls and staff for their hard work, which has produced such an excellent set of results.

“The girls have worked with great enthusiasm.”

At Shiplake College the pass rate was also 100 per cent and a record 30 per cent of pupils achieved A* or A grades, up seven per cent on last year.

There was also an increase in the proportion of A* to B grades, going from 53 per cent in 2016 to 60 per cent this year.

The proportion of passes at C grade and above was 91 per cent, the same as last year. Some of the strongest performing departments at the school were English, maths, geography and art.

Two of the top performers were Morgan Taylor, from Henley, and Josh O’Hare, from Watlington, who both won academic scholarships after achieving four A*s, four A grades and a B. Other pupils who achieved eight or more passes at A* to A grade were Duncan Eglinton, Jamie Gibbs, Rafe Koser and Joseph Ruffle.

Headmaster Gregg Davies said: “This is another set of excellent results, which will put Shiplake among a group of leading independent schools in the area.

“We are proud to be an ‘all-ability’ school where pupils are selected at entry because they show a desire to take advantage not only of an outstanding classroom experience but the other opportunities we offer.

“We have demonstrated over the past few years that our pupils can achieve excellence whether it be at the top of national levels or simply beyond their own personal goals.

“Shiplake is a school which is now consistently delivering top results academically and in many other areas.

“While most other schools grapple with the new GCSE grading system as part of government reforms, we decided to follow the iGCSE route in maths and English to enable like-for-like results. This decision has meant that pupils’ scripts were not subject to a guinea-pig effect which is inevitable when new schemes are introduced without sufficient support.

“The pupils have demonstrated great character and growth mindset as they have applied themselves throughout the year.

“My thanks not only to our team of inspirational teachers but also to the many other support staff at Shiplake who work together to bring out the best in our pupils.”

At Reading Blue Coat School in Sonning, the pass rate, including English and maths, was 98.9 per cent, compared with 97 per cent last year.

All students who took further maths secured A* or As with distinction and all the geography students achieved A* to B grades while 78 per cent of art grades were A* or A.

Dr Kevin Magill, deputy head (academic), said: “I am proud of our pupils who have worked hard to achieve another set of excellent GCSE results for the school and, of course, there are many individual success stories as well.”

Francisco Nabais, from Charvil, achieved seven A*s and four As, despite English being his second language.

He joined the school in 2015 when his family moved to the UK from Portugal.

Francisco said: “I am relieved GCSEs are now over and I can look forward to specialising in sciences at A-level.

“I would like to study mechanical engineering at university or perhaps robotics, which I find really interesting.”

Both Tom James and Tom Crook, from Shiplake, achieved nine A*s and two A grades.

Other high achievers included Joshua Mill, from Henley, (eight A*s and three A grades), Matt Peters, from Emmer Green, (eight A*s and one A grade), Sam Johnson, from Shiplake, (seven A*s and two A grades) and Matt Stone, from Wargrave, (six A*s and four A grades).

Headmaster Jesse Elzinga said: “This is another fine set of GCSEs for Blue Coat and I am immensely proud of the diligent work of our pupils and staff.

“The pupils at this school enjoy a rich co-curricular programme but we also take academic achievement seriously and these results show just how committed this community is to excellence.

“We look forward to welcoming these boys into the sixth form as well as the many new joiners, who have achieved impressive results at their respective schools.”

At the Oratory School for boys in Woodcote, 93 per cent of students achieved five or more A* to C grades, including English and maths, compared with 90 per cent last year.

Sixty per cent of grades were B or above.

Thirty-five per cent of all maths grades were A* while in the art & design and music departments every grade was a B or above.

Year 10 students Lucas Sieyes and Owen Bell took the new maths GCSE a year early and were both awarded the top score of 9.

Headmaster Joseph Smith said: “These are very pleasing results and congratulations should go to the young men who have achieved them and the teachers who have prepared them so well.

“As well as some outstanding grades at the top end, there are many success stories of young men achieving well beyond their expectations and, as a school with a broad ability spread, we should acknowledge and celebrate this.”

Amy Penrose, from Shiplake, was among the top performers at the Abbey School in Reading.

She achieved seven A*s, two A grades and a B and will study geography, art, English and philosophy of religion in the sixth form.

She spent results day afternoon doing a Dragons’ Den section of her National Citizen Service before celebrating at Reading Festival.

Jessica Dent, from Sonning Common, achieved four A*s, four A grades and a B.

She is the daughter of the school’s headteacher Rachel Dent, who said: “I am incredibly proud of the girls for all their hard work and determination in the lead-up to these excellent results.

“Their achievements are truly well deserved and will give the girls a strong foundation to progress on to their sixth form studies.”