Make your own bicycle from bamboo and recyclables 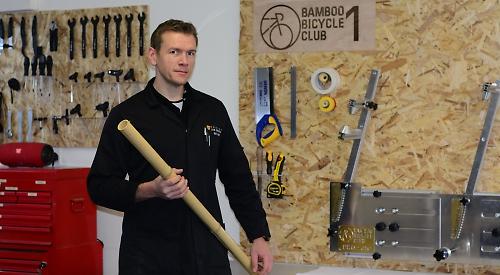 CYCLISTS can learn how to build a bicycle from wood and recycled parts.

A series of two-day workshops is to be held at the Oratory School in Woodcote.

Anyone can attend the Bamboo Bicycle Club and come up with their own design before assembling it from scratch with help from Nick Mills, the school’s head of design technology.

The frames of the bikes are made from bamboo poles and can be either thick for a mountain bike or thinner to make a faster bike suitable for road use. These are glued together using a resin derived from plants.

The pedals, gears and other components, which are all made from recyclable materials, are then bolted on.

The process requires only hand tools and doesn’t require electricity in order to have as little impact on the environment as possible.

Mr Mills, who is running the workshops in partnership with Bamboo Bicycle Club founder James Marr, from London, says bamboo is tougher than steel or aluminium and isn’t prone to corrosion so the bikes will last at least as long as a regular one.

He first learned about the scheme in 2012 but only had the chance to become involved when he joined the independent school just over a year ago.

Now he hopes to extend it to other schools in the area.

Mr Mills said: “We’ve had a bit of interest but I think some people are sceptical because I’m a DT teacher so they assume it’ll be hard for them to do it. I’m going to get some of our boys building them to show how easy it is.

“It’s quite an experience to spend two days building something you could be using for the rest of your life if you look after it properly.”