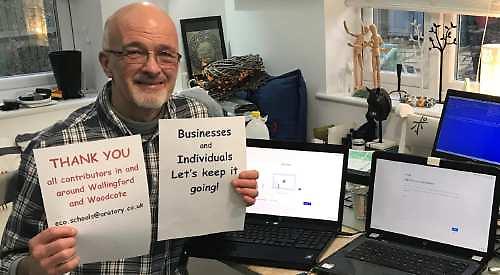 A TEACHER at the Oratory School in Woodcote is fixing broken laptops to give to children who are learning at home during the coronavirus pandemic.

Göran Lennartsson, who teaches maths, has so far rescued about 30 unwanted machines for the Oratory’s own pupils and those at Langtree School, also in the village, plus Woodcote, Whitchurch, Goring and Nettlebed primary schools.

The machines were donated by families living in the area and Mr Lennartsson, who has IT experience, has carried out repairs such as mending broken keys and replacing vital components.

Once the computers are working again, he securely wipes the hard drives so confidential data can never be recovered and installs CloudReady, an operating system like Windows but based on Google’s Chrome technology.

This means applications like Microsoft Office can be accessed through the internet and don’t have to be installed.

Langtree then acts as a distribution “hub”, handing the laptops to families who might otherwise be unable to get online. The school has promoted the scheme by calling for both donors and recipients.

Mr Lennartsson has worked at the Oratory, an independent school, for about four years and
co-ordinates its “eco-schools” scheme in which children work to improve their environmental impact.

He came up with the idea last month and initially refurbished seven machines, one for an Oratory pupil and six for Langtree children. Since then demand has increased.

He said: “I’ve been into computers for years and build my own machines so I’ve always been comfortable working with them. I’m often asked to fix computers for people anyway.

“We didn’t get much uptake when this started but it snowballed after the first batch, when Langtree got the word out more widely. They’ve done a brilliant job and even now I’ve got five more machines waiting to be fixed.

“The schools will decide how they’re handed out but it’s helping children who might have struggled to carry on having lessons. Some pupils can go into school for support but helping them to stay at home keeps pressure off teachers.

“I’m grateful for the community’s support and have found it very rewarding. It would be nice if any businesses can donate old machines as any sensitive data would be permanently erased.”

Anyone who can help should email eco.recycling@oratory.co.uk