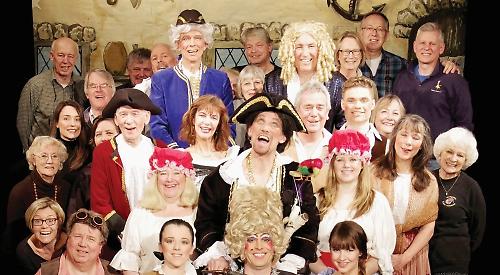 ON one of the rainiest nights we have seen in a while, Wargrave Theatre Workshop set about transporting us to the Caribbean with their pantomime adaptation of Robert Louis Stevenson’s Treasure Island. But did we strike gold or were we headed for Davy Jones’s Locker?

The Woodclyffe Hall has seen some improvements recently, the parish council is steadily renovating the Hall and “Workshop” — as the amateur drama group refer to themselves — have invested in recent years in lighting and sound equipment and tiered seating for the hall which raise the stakes beyond what you might expect for a village pantomime.

We were welcomed by a friendly team at the door, bought our glossy programme and a drink from the bar and found our seats. With the tiered seats and a balcony at the very back of the hall everyone had a great view of the traditional red velvet drapes as the house lights went down.

In true panto tradition the Spirit of the Sea and our villain Long John Silver himself set the scene as good versus evil and no sooner have we booed the baddie than the lights come up and the assembled company launch into a spirited rendition of Oom Pah set in Dame Rosie Bloom’s Inn.

The script, by Alan Frayn, makes a commendable effort to include the major plot points of the classic adventure tale. There is the treasure map, of course, salty sea dogs and pirates, a desert island castaway and Captain Smollet (well, Captain Mullet at any rate, played by Clive Dow who camped it up to the audience’s delight).

Being a pantomime, we also had the Dame, Rosie Bloom, played with gusto by Graham Burke in a succession of splendid frocks and wigs and of course young Jim Lad was our principal boy, heroically played by Kelly Doward in fishnets and heels.

The love interest was the Squire’s daughter, Penny, played by young Issy Inman, who started the story as a demure 18th century maiden and by the finale was a sassy-looking pirate with a splendidly feathered tricorn hat. Costume is always a strong suit for Wargrave Theatre Workshop and this year’s panto was a feast for the eyes with frock coats and lace collars for the Captain and Mike Watts’ Squire, corsets for the wenches and a band of mutinous, bloodthirsty pirates giving great scope for the wardrobe department, lead by Maureen Fennemore, to show off their considerable skill.

The backdrops really were a treat, painted for this show by Sheila Williams and her talented team, depicting Bristol Dock and the inn and ship interiors, and there were many clever and funny tricks and in-jokes in the set and scenery.

Impressive though it was, the set didn’t upstage the cast of keen amateurs and Emmajane Hughes as director really brought out the best from Wargrave regulars and new faces alike assisted with choreography by Linda Daman and Josie Daman.

Michael Simpson’s Long John Silver was vital to the success of the show and went from ship’s cook to a mean and growling pirate singing Fifteen Men on a Dead Man’s Chest and almost into lounge singer territory with his version of Beyond the Sea to close the first act.

All the while he hobbles on his crutch and even has a “talking” parrot for one scene.

Every pantomime deserves a comedy duo and Treasure Island didn’t disappoint with Graham Wheal and Sara Beazley bringing plenty of energy and a stream of gags as Long John’s sidekicks Blind Ali and Sea-Snake Sally.

After the interval we were still on board ship, the sun was high and the cast treated us to Too Darn Hot from Kiss Me Kate, led by Elliot Warms and Peter Hughes. This number, along with the rest of an eclectic playlist, was arranged especially for the show by musical director Rod Murray.

All the musical numbers were delivered with enthusiasm and enjoyment — and everyone knew the words!

There is not space to mention everyone by name but I counted 19 cast members and another 48 names in the programme, taking care of everything from scenery to refreshments.

Oh, and of course the 20 members of Fledglings Youth Dance Company who took shifts in bringing a tropical flavour to the proceedings with their Hot Hot Hot routine as we arrived on Treasure Island.

Wargrave Theatre Workshop and the Woodclyffe Hall both managed to punch above their weight for a village panto and the audience came away with smiling faces having enjoyed a traditional, feelgood evening at the theatre.

You can find out more about Wargrave Theatre Workshop and the forthcoming productions Ladies’ Day and The Merchant of Venice on Wargrave Mill Green at www.wargravetheatre.co.uk