Springfields star's solo show is anything but 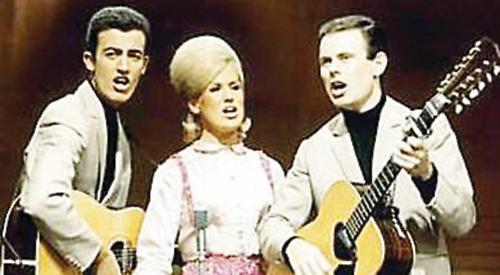 TO say Mike Hurst feels at home on stage at the Kenton Theatre is clearly an understatement.

“To me it’s like singing in my living room, playing for friends and family,” he says.

Now 75, the veteran singer, guitarist and record producer returns to the New Street venue on Sunday night at 7.30pm with his new show, “Tracks of My Years”.

This is Mike’s 17th appearance at the theatre under his own name — but the evening will be far from a solo endeavour.

A show of two halves, the first will see him joined by his son Jonas, whose 2007 album with the duo Jonas and Plunkett he produced.

Father and son will perform classic Everly Brothers hits and Mike will perform songs from his Capitol Records album Home, which was a big hit in America.

The second half of the show is aimed squarely at fans of what some people call “The Springing Sixties” — the period from 1960 to 1963 that saw the pop charts dominated by the Springfields.

Mike, who joined Dusty and Tom Springfield in the band in February 1962, replacing founder member Tim Feild, was on board for some of their biggest hits.

The Springfields’ success that year — which included a million-selling cover version of Silver Threads and Golden Needles that became the first single by a British act to break into the Billboard top 20 — saw them voted best British group by NME readers.

Best newcomers in the same poll were the Beatles, who had just had their first hit with Love Me Do.

The Liverpool rockers would go on to eclipse their London rivals, but The Penguin Encyclopedia of Popular Music states that the Springfields, jointly and severally, were responsible for more hits than any other British group except the Beatles — more than 50 in total.

The Springfields disbanded in October 1963 after Dusty — a natural born soul singer who felt restricted by the group’s folk act and her brother’s lead role in the trio — decided to go solo.

Mike, who had just turned 21, went on to carve out a hugely successful career as a record producer. At Decca he oversaw Marc Bolan’s first recording session, which produced his debut single The Wizard.

Recent years have seen Mike launch a 21st century revival of the Springfields — and the second half of his Kenton show will see him joined by bandmates Andy Marlow and Alice Pitt-Carter.

Together they will be performing acoustic versions of the group’s Sixties hits, including Dusty and Tom Springfield compositions — plus some of the many tracks Mike worked on as a record producer.

“We’re all acoustic,” he says. “That’s what we do, the three of us — and not just the Springfields. We’ve got 60-odd classics to choose from — from my stuff and Cat Stevens, to Tom Springfield’s stuff with the Seekers, and from Dusty’s solo stuff.

“And I’ll do lots of songs that I haven’t done for years — so I do Paul Simon, I do Dylan, I do all sorts of people — country songs. So I do that for the first half and then the second half it’s the Springfields with Andy and Alice.”

Both of Mike’s new bandmates have local connections, it turns out.

“Andy Marlow is a Henley boy. He plays 12-string guitar. I put an ad in the Henley Standard, held auditions up at Bix Manor and found Andy. He’s a really, really good guitarist and such a nice guy, so I had to have Andy.”

Alice can act as well as sing. “She did a pantomime in Henley,” recalls Mike. “That’s how I found her. She was in one of the first Kenton Theatre pantomimes four or five years ago.”

Andy also sings, and the 21st century band follows the original Springfields template of “three-part harmonies and two guitarists”, as Mike puts it. It’s an approach that continues to prove popular with audiences up and down the country.

“Last weekend we were at Butlins in Minehead,” says Mike. “We had 1,500 people there for the Festival of the Sixties tour. Then we’re at Skegness in two weeks’ time on the same tour.

“I mean, yeah, I get a buzz out of it. Still! That’s what I sometimes find extraordinary — I sometimes think it’s a lot to walk out somewhere in front of a large crowd of people and tell yourself, ‘I can do this, I’m fine.’”

One and a half thousand people is a decent-sized crowd by anyone’s standards, isn’t it?

“Butlins is big. I mean, their centre stage halls are huge. You know, people sneer at Butlins and everything else, but when we went there last weekend that crowd sang every song with us — and that’s just such a great feeling when I look out at them. And of course they do — they’re all my age, of course they know the songs! Which is great. So, yeah, I keep doing them.”

The Kenton is a far more intimate venue, of course, but that suits Mike and his fellow Springfields down to the ground.

“A lot of people have said this in the music industry but it’s something I’ve known all my life — it’s what you leave out that counts. So many people pile everything in musically, which can be good if you’re appearing to a big crowd and they make a lot of noise. But if you’re in small theatres and places like that, it’s the personal touch. If you’ve got two acoustic guitarists and three voices, it’s great because it’s like singing to somebody in their front room — and it works!”