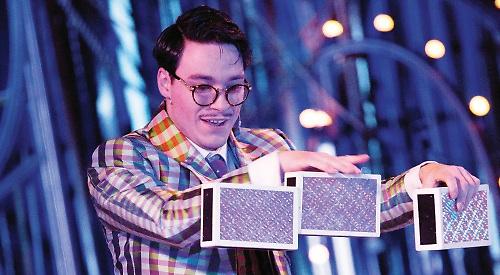 GIFFORDS Circus, touring once again and celebrating the 250th anniversary of the birth of circus as an art form, is back in town.

Nestled amongst the vast lawns and ancient woods of the Blenheim Palace estate was a delightful collection of vintage showman’s wagons painted in a striking burgundy, complete with a traditional big top, and an orderly queue of people of all ages waiting to see this year’s show — the appropriately titled “My Beautiful Circus”.

This is no ordinary circus, however. From its beginnings as a miniature village green circus in 2000, Giffords Circus, led by founder and creative director Nell Gifford, has put on shows featuring astonishingly talented performers and artistes, acrobats, magicians, jugglers, clowns, singers, and an array of enchanting animals.

This year’s theme takes the Thirties as its inspiration, so there is live jazz music from the Giffords Circus Band, elegant, intricate costumes and an air of sophistication.

The performers are drawn from all over Europe, but the whole effect is unmistakably English, theatrical, charming and magical.

Seated on the newly lined velvet benches ringing the big top, my two children, clutching old-fashioned sweets and candyfloss, began to be mesmerised by Tweedy the Clown, clowning around with giant golf balls as the opening act.

Nell herself soon followed with a group of lively pocket ponies, trotting around the ring and causing chuckles of delight.

Then there came the most outstanding acrobatic act I have ever seen.

One of the girls from the Dias family, a troupe of Portuguese circus performers, used a metal ladder balanced on the upturned feet of her sister to climb up to the top and demonstrate extraordinary feats of gymnastics and contortion — including using her left foot to wave to the audience from over her right shoulder!

Transfixed, my oldest daughter silently mouthed “Wow.” It was a performance breathtaking in its execution and an unforgettable sight.

We were entertained by jugglers, all against a backdrop of jolly Thirties music by leading lights such as Gershwin, Cole Porter and Nacio Herb Brown.

My youngest daughter couldn’t resist exclaiming “They’re so cute!” and I had to agree. Diana guided the beautiful little dogs on to clever props, such as large velvet top hats, where they stood on their hind legs and performed various tricks.

The dachshunds weren’t always entirely obedient, but that only added to their charm.

After the interval, when there was the opportunity to buy tea and coffee, as well as cakes and pizza from the Circus Sauce café , we were treated to Dany Cesar on a magnificent horse, cantering around the ring and skipping over a specially made rope.

Further delights included the Curatola Brothers with their seamless acrobatic pieces, and the Romanian Cretu troupe with the ever popular and daring teeterboard act.

Nancy Trotter Landry, a long-time performer with Giffords, provided amusement with a talking turkey — certainly the first time I have seen a turkey in a circus tent! — and some slapstick routines from Tweedy the Clown caused plenty of mirth amongst my two children, not to mention all the other families in the audience.

The Cuban artiste Lisandra Austin proved her aerial skills with the use of silks before the show culminated in an all-inclusive song and dance routine with the opportunity for the audience — children especially — to step into the ring and join in with the circus.

A not to be missed, spectacular highlight of the summer.