Step into my parlour says Britain's Got Talent finalist 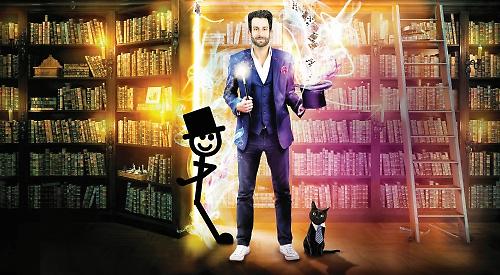 THREE years on from reaching the final of Britain’s Got Talent, magic man Jamie Raven is going from strength to strength.

The popular conjuror is touring the UK with his new show “Making Magic” — a look at how magicians do what they do that asks why magic works on audiences.

How are our hearts fooled into believing something that our brains know simply can’t be true?

“Making Magic” will culminate in a random member of the audience, with no prior performing experience being turned into a magician in order to perform the final trick of the show live on stage with Jamie.

The magician burst on to an unsuspecting world during the 2015 series of Britain’s Got Talent.

His act amazed audiences and even had Simon Cowell exclaiming “I now finally believe in magic!” en route to reaching the final.

He narrowly lost out to dancing dog act Jules O’Dwyer and Matisse in controversial circumstances, but later joked that he had finished the show’s “highest placed human”.

Jamie’s appearances on Britain’s Got Talent and his subsequent performances have now been seen more than 450 million times online and on TV, making him one of the most watched magicians in the world today.

The Times have called him “disarming and ingenious” while The Stage’s reviewer wrote that “his tricks have a twist at the end to bamboozle even the most cynical seen-it-all crowds”.

But what sparked Jamie’s own interest in magic?

“I think I was fascinated by magic and when I was a child about 10 years old there were so many good magicians performing on the television — you had people like Paul Daniels, Derren Brown, David Copperfield, Paul Zenon.”

As a seasoned performer, audiences must wonder what Jamie’s favourite type of magic is. “I really love what some would describe as parlour magic, with lots of patter. You often see it on the television where the magic is being performed to a small group on stage and the main audience are just watching.”

Does he have any advice to pass on to aspiring magicians? “Always try and be yourself and make people want to come and see you. Despite, what the media say, don’t try and be the next whoever, be the first you.”

Was there ever a Plan B if magic didn’t work out? “I did go to university and have a degree in economics but will admit I have never looked into a profession where I could use it.”

Lastly, how does he relax after a show? “I always hang around afterwards and chat with any of the audience that want to. Then following that back to wherever I am staying and watch some comedy box sets. Away from performing I love playing golf.”

For tickets and times, visit www.jamieraven.co.uk/tour