What a lovely location 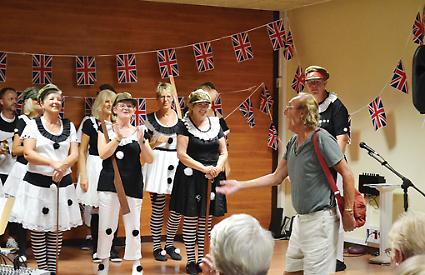 Henley resident Mike Huntington, a longstanding member of Henley Amateur Operatic and Dramatic Society, has been wintering in the sunshine in Tenerife.

However, not one to sit around too long in the sunshine, Mike set himself the task of directing the well-known show Oh! What a Lovely War in Tenerife for the ex-pats as a precursor to producing the same show in Henley in August.

He certainly had his work cut out, because only two of the cast had ever been on stage before. The sunshine version of the show raised more than £1700 for charity.

To commemorate the centenary of the First World War HAODS will be producing Oh! What a Lovely War as an outdoor fringe production At the Butchers Arms in Sonning Common and in their studio in August and will be directed by Mike Huntington.

The show is a particular favourite of his, and he last brought this epic to the stage for HAODS in 1994. Donations from the profits will be made to the 2014 Poppy Appeal. HAODS will be also be performing a concert version at the Lady McAlpine’s Fawley Hill Steam and Vintage weekend at the Fawley estate in May.