Special FX must be seen to be believed 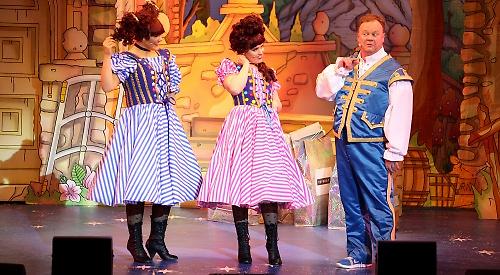 THE delightful funfest that is panto at the Hexagon brought lots of razzle-dazzle, moving moments and happy vibes.

This year, joining the Cinderella writing team as well as playing the beloved Buttons, national treasure Justin Fletcher whipped up both cast and audience alike into a frenzy of rocking out and having a ball.

Marvellous Paul Morse as the delectably squishy Nanny Cuddles also got everyone into the swing of things with escapades in Hardup House, sorting out the nonsense of twisted sisters Pollyanna and Pot Pourri and the hilariously monikered Madame Botemme (a talented Rachel Delooze, also playing the polar opposite Fairy Godmother).

The coupling of Gracie Johnson (Cinderella) and Go!Go!Go! team member Carl Tracey (Prince Barnaby) made for a perfect pitch, while all around them fun and games ensued, in this enchanting tale.

There was lots of lovely banter and audience interaction, with a great sense of inclusion and warm affection, all set in a proliferation of colourful costumes, characters and scenery.

Two of the major highlights were the horse and carriage taking the belle to the ball, quite simply an incredible animatronic (ahem, I mean magical) feat, and then something that just has to be seen to be believed — the balloon ballet.

Everything that is loveable about Mr Tumble and everything that makes a dame and her sidekick what they are was captured in this unique spectacle, featuring “Busty Darcel” and “Rudolph Nurofen.”

With timings carried out to perfection and the old classic panto skits made to feel as fresh as a daisy (Oh yes they were!) and a big topping of happy ever after, this was grand stuff.