Rise of the Nazis musical now packs an even harder punch 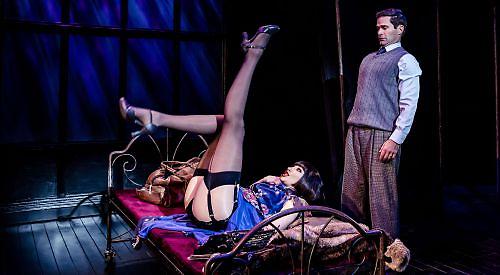 WE’LL start at the end with as devastating a finale as I can recall in the theatre. All the noise, music, gaiety and bluster that Cabaret has come to mean is silenced in one desperate scene.

Ten naked bodies cling together as the final sound effect whispers in like thunder — the hissing of a gas chamber. It was a punch in the stomach!

Among those naked bodies is Emcee, the outrageous gay compère of the Kit Kat Klub, who not long before had been leading the jokes against the Jews.

Cabaret is not your normal musical, it keeps punching at you just when you feel safe and this production from Bill Kenwright magnifies that effect — sometimes at the expense of storytelling.

The story sees hopeful writer Cliff Bradshaw arriving in Berlin, meeting the denizens of the Kit Kat Klub and living a bohemian life against the backdrop of the development of Nazism.

Director Rufus Norris has gone big — the ensemble pieces are brash and in your face with lots of male and female flesh and splayed limbs leaving nothing to the imagination.

The choreography and movement are spectacular but when it all quietens down and we are in the intimacy of a love scene or the confines of a poky Berlin lodging house the huge set and stage dwarf the players.

They have to move further apart to fill it and raise their voices at the same time.

This production saw some fine acting and vocal performances, including John Partridge as Emcee, Kara Lily Hayworth as Sally Bowles, Anita Harris as Mrs Schneider and Charles Haggerty as Bradshaw.

It’s impressive but seemed to lack fluency and subtlety with all the work being put into making a musical extravaganza and maybe not enough into revealing the story — other productions show the rise of Nazism more insidiously.

How prescient, though, that it should be at the New Theatre a week after Holocaust Memorial Day.

As long as it continues to be performed the memory and the warning that goes with it will survive.