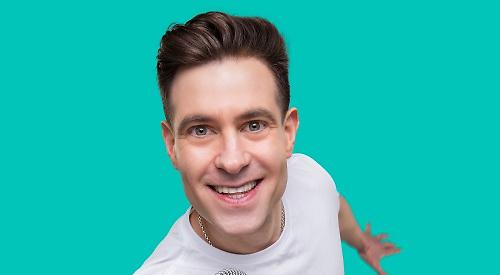 A COMEDIAN and prankster is to appear at the Norden Farm Centre for the Arts as part of a nationwide stand-up tour.

Simon Brodkin, who is a
self-styled “professional troublemaker”, will be performing live at the venue in Maidenhead on October 1.

His stunts have included showering former FIFA President Sepp Blatter with banknotes, upstaging Kanye West on the Pyramid stage at Glastonbury, and handing former prime minister Theresa May her P45 during her Conservative Party conference speech.

Brodkin’s latest show, Troublemaker, sees him come to terms with the fact that trouble has followed him throughout his life — from primary school through to medical school and then homeschooling during the coronavirus pandemic.

Critics have labelled him as the “world’s greatest blagger” and Brodkin will explore what it’s like to be chased by Donald Trump’s bodyguards, make the police laugh while they arrest you, and be outed as a Jew by the Ku Klux Klan.

His stunts were documented in Channel 4’s Britain’s Greatest Hoaxer, which was nominated for best documentary at the Monte Carlo TV Festival Golden Nymph Awards in 2018, and have been watched by more than 15 million people on YouTube.

Brodkin has performed out of character as himself for the first time in 2019 and has since been selected by the Guardian and the Evening Standard as one of the best comedy shows at the Edinburgh Fringe.

Brodkin has also performed and hosted as Lee on Live at the Apollo (BBC1), Sunday Night at the Palladium (ITV), The John Bishop Christmas Show (BBC1), Children In Need (BBC1) and Channel 4’s Comedy Gala.