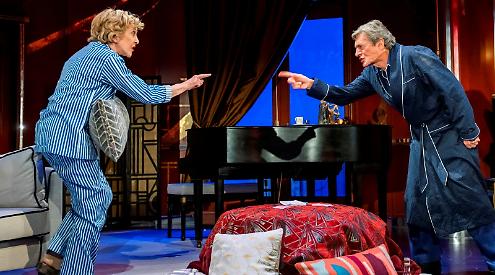 IT’S no honeymoon being on your honeymoon. At least it isn’t for Amanda and Elyot.

It should be. After all, they’re madly in love and staying in a delightful hotel in Deauville, with a balcony view across to the yachts twinkling on the water.

The trouble is that Amanda and Elyot divorced five years ago.

Now they are hitched to Victor and Sibyl respectively and, by chance, the two honeymooning couples have ended up in adjoining rooms.

Shock and consternation are quickly replaced by the realisation that, actually, they have never stopped loving each other. So what can they do but ditch their new spouses and elope to Paris?

This is the opening act to Noël Coward’s classic comedy Private Lives in a new touring production starring Nigel Havers as Elyot and Patricia Hodge as Amanda.

Early on, the contrast between two styles of marriage is established — the “cosy love” that the honeymooners were looking forward to and the fireworks which typify the relationship between Elyot and Amanda. When they’re not cooing like doves they are fighting like cats and fighting so frequently that they need a code phrase to signal a two-minute truce.

“Solomon Isaacs” was chosen by Coward, one suspects, because it can be shortened to “Sollocks”.

This establishes the slightly silly tone of Private Lives and, of course, it’s completely intentional.

“Let’s be superficial,” says Elyot at one point. And glamorous, he might have added. The play is handsomely staged in this production, directed by Christopher Luscombe and designed by Simon Higlett.

Havers brings charm and mischief to Elyot while Hodge’s Amanda can swivel from alluring to alarming in moments.

Dugald Bruce-Lockhart (Victor) and Natalie Walter (Sibyl) ably provide the necessary foil to the histrionics of the lead couple, while Aicha Kossoko makes a neat turn out of her brief appearances as the maid Louise.

As a bonus, the play features some of Coward’s own music, including the classic number Some Day I’ll Find You, which he wrote for the original production in 1930.

Nearly a century on, this barbed romantic comedy still delighted and distracted the packed audience at the Oxford Playhouse.