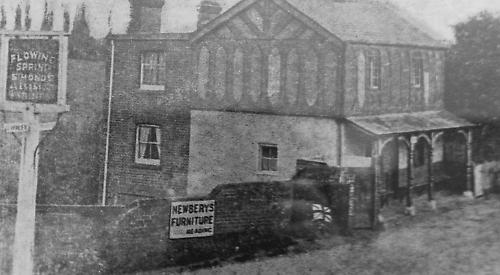 A COUPLE who bought a pub, transforming it into a free house for the first time in its 220-year history, say they wanted to ensure it stayed a traditional venue.

Nick Willson and his wife Hazel Lucas bought the freehold of the Flowing Spring, in Playhatch, from Fuller’s after running it for more than six years.

The couple, who took the tenancy of the pub in 2010, finalised the purchase of the buildings and land from the Chiswick-based brewery at the end of last month.

Since they took over they have endured the flooding of their car park two years in a row, complaints over their roadside posters and, currently, the prospect of the A4155 Henley Road, where the pub is located, being closed for two months while the road, which is subsiding, is repaired.

But this has not deterred the couple who celebrated their purchase with a party and live music on Saturday night from folk group RyeWolf and blues and boogie band 3 Buck Shirt, which more than 200 people attended. Mr Willson admitted that while flooding had previously been a problem this did not put them off purchasing the pub.

He explained: “Although the floods are obviously disruptive, it’s sort of a minor setback in the grand scheme of things.

“Over the course of the year it doesn’t really matter. We have gone through three serious floods and we have coped. You get through it and you carry on, it’s fine.

“Ever since we moved here in 2010 we have just felt so comfortable and so at home. It suits our characters and the quirkiness and character we have given the pub I think is complemented by the customers. All the pieces fit together really well.

“When we were debating whether to cough up the money that Fuller’s were asking we started looking at other pubs online and visiting them and, they might have been beautiful pubs, but the area wasn’t right or the location or something about it.

“The more we looked at other places the more we felt ‘this is the one for us and we have got to fight to get it’ and it’s our home, of course.

“We would have been absolutely crazy to give that up and we’ve built a great business here. It’s so exciting as it gives us so many opportunities now.

“We were not going to let it slip away to someone else which might have threatened its future as a unique, traditional country pub. Buying the pub gives us complete freedom in how we run the business.”

He added: “We have built a reputation for our free-from range of meals and now we can complement that offer with our drinks, with more gluten-free, vegan and alcohol-free beers, ciders and wines. We also now have the pleasure of offering up to six real ales from independent breweries across the country.”

The pub is currently undergoing the transition with the couple’s brand replacing Fuller’s. The couple are also making other changes, including a facelift of white paint on the outside.

In December 2013, the pub lost trade for several weeks after its car park was under several feet of water. It was the second year running that the couple had suffered the problem. Then in 2015 Mr Willson was told promotional posters outside his pub could be in breach of planning rules.

The couple were the subject of an enforcement investigation by South Oxfordshire District Council following a complaint by a member of the public who alleged the A1-sized posters were encroaching on the highway, but the council told them the complaint had no grounds.

During the 1800s the Flowing Spring was owned by Hewett and Co, a brewery based in Shurlock Row which had an estate of around 40 pubs.

In 1899, Simonds of Reading purchased most of Hewett’s estate and paid £1,275 for the Flowing Spring. Simonds was eventually bought up by Courage and then, in 1980, Fuller’s bought the pub as Courage underwent a huge sell-off.