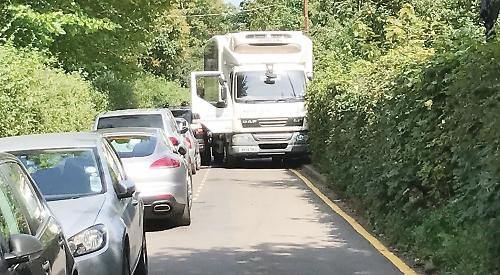 VILLAGERS are calling for action after lorries caused chaos on a narrow road three times in five days.

Police attended two of the incidents in Remenham Lane, Remenham, which resulted in traffic jams or the road being closed for at least an hour and damage to two cars.

The first happened at about 1pm on Thursday last week when a flatbed lorry carrying scaffolding equipment hit a parked car after turning off White Hill and making its way towards Remenham.

The driver tried to swerve around the vehicle but pulled back into his lane too soon, striking the front of the car with his rear end and spinning it 90 degrees anti-clockwise so that it blocked the street.

Residents helped police officers to direct traffic until the owner of the car, a woman who was walking in the area with her family, returned at about 3pm. The vehicle was damaged but she was able to drive it away.

At about the same time the following day, another flatbed lorry tried to make the same journey while on its way to Temple Island Meadows for the dismantling of the Rewind festival site.

The driver encountered heavy traffic coming the other way about half a mile from the White Hill junction, so dozens of cars had to slowly reverse towards Aston so the lorry could get through.

At about 1pm on bank holiday Monday, a Costa delivery lorry coming towards White Hill from Remenham got stuck in a hedgerow after hitting the front driver’s side of a parked 4x4 which it had attempted to squeeze past.

There were barely a few millimetres between the two vehicles and the lorry couldn’t go forwards or backwards as it was likely to cause further damage to the 4x4. Police were called and once again directed traffic back on to the main road until the owner arrived.

Felicity Rutland, who lives in Remenham Lane, witnessed all three incidents and her daughter Lucy helped to direct traffic after the first one.

She said: “The driver in the first incident was terribly shocked because he knew it was his fault. He was in a bad way and a cyclist had to stay with him until he’d calmed down.

“These two women eventually came along with a child and when we told them what had happened one said, ‘oh dear, I hope that’s not our car’. Her daughter then looked ahead and said, ‘actually, Mum, I think it is’.

“The day after that, I was stuck behind another lorry going in the same direction. There were loads of cars coming the other way and I can only assume they’d turned off White Hill to try to take a shortcut around the traffic approaching Henley Bridge.

"Luckily, there was no collision that time. The driver pulled over at Remenham and when I stopped to talk he was very polite and mortified at what had happened.

“He said he was going to Rewind and hadn’t been told to get there via the top of the hill at Remenham Church Lane, which is the route people use during the festival.

“I didn’t see much of the incident on Monday but the road was shut for more than three hours. When I looked out of the window, the police seemed to be scratching their heads working out what to do.

“We know to expect disruption during the Henley Royal Regatta, Henley Festival and Rewind but incidents outside of those events are a real aggravation. It’s the first time anything this serious has happened but we have lots of issues with traffic. It’s bad enough that people use the lane as a rat-run but many of them play loud music as well.”

Mrs Rutland said the problems were exacerbated by the queues of vehicles on White Hill waiting to enter Henley. These are caused by Scoot, a computerised system installed by Oxfordshire County Council to reduce air pollution in Henley by keeping vehicles waiting on the outskirts instead of idling their engines in the town centre.

Mrs Rutland said: “There’s a constant stream of cars going past my house to avoid the hill, which doesn’t actually save them any time but causes no end of grief for us. Henley is a much bigger town and can cope with congestion much better than we can. They say there’s no solution but I think we’re being fobbed off.”

Enda Cahill, her next-door neighbour, said: “It’s quite common for vehicles to get stuck the lane and we need to be taking it seriously after this week.

“The cars were parked legally and within the lines but there simply wasn’t the room for those trucks to pass. We know there’s no Costa in Remenham so that lorry was clearly using it as a rat-run.

“The trouble is that Scoot only knows the traffic flow at each junction but not how far back the queue is stretching. There are times when it needs to be more generous at the lights as I’ve seen traffic going as far back as the White Hill service station.”

Remenham Parish Council chairman John Halsall, who also represents the village at Wokingham Borough Council, said he would raise the possibility of updating Scoot through Henley Town Council’s transport strategy group, of which he is a member. He also plans to write to the Rewind organisers and to Whitbread, which owns Costa.

He said: “The main problem is the queuing down Remenham Hill. There are times when we need to get traffic flowing over Henley Bridge more smoothly. It would help if the county council could manually override Scoot, either remotely or directly on site, during major events like Rewind.

“The worst time is actually on the Friday of the Henley Women’s Regatta, when you’ve got school-run and commuter traffic competing with clubs unloading boats.

“I’m optimistic that we can improve the situation if we can get Wokingham Borough Council and Oxfordshire County Council working together on this. Scoot is very much a system of its time. It was needed 20 years ago but now it’s past its sell-by date and needs to be much smarter to cope with the changing circumstances on the roads.

“That said, articulated lorries are getting larger all the time and you’d have to be bonkers to try to get one down a country lane.”

Henley’s county councillor Stefan Gawrysiak, who chairs the transport strategy group, said some adjustments were made to Scoot earlier this year in order to make it more flexible at the bridge. He added: “We’re happy to consider further changes as part of a broader series of improvements. I wouldn’t want to do anything on a knee-jerk basis.”

Rewind organiser David Heartfield said: “We spend an inordinate amount of time working on our traffic management strategy and instruct all our contractors to enter from the top of the hill. Although Remenham Lane is a public highway which large lorries can legally use, it clearly isn’t suitable for them.

“Unfortunately, we can’t stop people from following their sat-navs and we don’t always hear about every incident. However, if people can provide us with details of the vehicle then we’re always happy to talk with contractors.”

Whitbread said it would ask its haulage contractor to investigate as all journeys were recorded by cameras on the lorries.