WATLINGTON town centre was brought to a standstill after a lorry tyre burst.

The incident happened shortly after 9am on Tuesday in Shirburn Street and resulted in queues along Shirburn Road and Couching Street.

It follows a long campaign by residents to ban heavy goods vehicles from the town.

Chris Robertson, of Shirburn Street, said the tyre burst sounded like a small explosion. People heard it at Icknield Community College, he said. Parents came up here thinking there had been a big accident.

Grant Goodman, who also lives in Shirburn Street, said: It was a massive bang. I thought it was Concorde going over. He said the incident was inevitable, adding: Ive been here for 12 years and seen the increase in traffic and sheer number of lorries that come through here. The whole house shakes, especially in the morning, when they come through.

Peter Richardson, of campaign group WATNEXT, said: This is something that has been waiting to happen for a long time. It is up to Oxfordshire County Council and all the other local authorities to finally do something about it.

Lorry drive Daniel Vsa, who works for SCH Logistics in Felixstowe, Suffolk, said he had been making a delivery to H+H Distribution nearby. 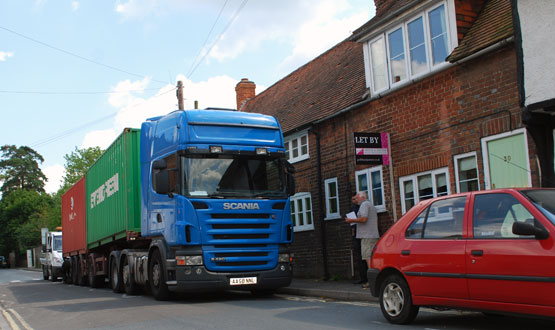