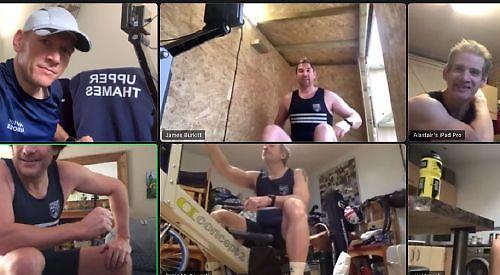 MEMBERS of Upper Thames Rowing Club in Henley won a virtual competition to row the length of the River Thames for charity.

The eight rowers used ergos to complete 346km in 20 hours, five minutes and 52 seconds over six days, beating 150 other crews from across the country.

The rowers, who are aged 37 to 57 and classed as masters, raised almost £3,000, which will be divided equally between Help for Heroes and London Youth Rowing, which encourages people from disadvantaged backgrounds to take up sport.

The rowers decided to support Help for Heroes as a former clubmate took his own life after serving in the armed forces. Mr Mills, 37, a teacher from Cholsey, said: “I’m phenomenally proud of what we’ve achieved as a group.

“There was a lot of good competition and I don’t think any of us believed it was something we would actually win.

“I might have jokingly said it at the start but without a doubt everyone found another gear they didn’t know they had.

“Nobody wanted to let anyone else down so we all felt motivated to keep going whenever it felt hard.

“We started off at what we thought was a good pace and egged each other on.

“One of the guys said he had rediscovered why he fell in love with the sport.”

The team, who will all receive medals, celebrated with a beer.

Mr Mills and three of the others returned to the water on Monday morning when the coronavirus restrictions were eased.

He said: “It wasn’t because we had any energy left to row but just because we could. I had nothing left in my legs but it was so nice to be able to be back on one of the best stretches of the Thames.”

The rowers will now consider entering this year’s Henley Royal Regatta in August.

“We’d enter one of the club events, such as the Thames Challenge for eights, or the Britannia Challenge for fours,” said Mr Mills.

“It would be unusual for a group of our age to enter what is normally for the younger athletes but this competition has been a really good starting point.”

Race the Thames was the brainchild of Olympic champion Andrew Triggs Hodge, who lives near Henley.

It was due to take place on the river but was held virtually because of the pandemic.

Mr Triggs Hodge said: “We are always keen to connect people with the river.

“There has been a wide range of people involved in the event, from the corporate side to rowing clubs around the country. We also had some amazing solo efforts. Upper Thames definitely deserve recognition for how they threw themselves into the event.”

A second crew from the club made up of rowers all over the age of 70 finished ninth overall.

Mr Davies, 75, of St Mark’s Road, Henley, said: “We all really enjoyed it and we were very pleased with our time.

“We have people who’ve been rowing most of their lives but a couple of us only took it up later in life. Everybody had a lot of fun.”

Mr Davies said: “It is a great initiative. Taking rowing to inner-city kids in London gives them motivation and purpose and has huge benefits. The transformation of the kids is enormous.”