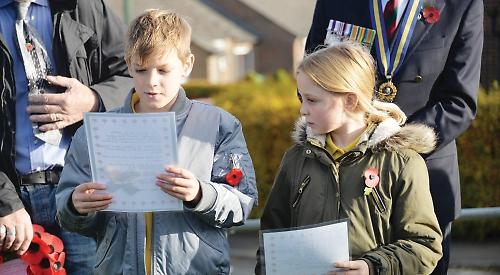 DOZENS of poppy crosses were planted by Henley schoolchildren as part of the town’s remembrance events.

Children from each school performed poetry that they had written inspired by remembrance and then planted the poppy crosses on a grassy bank overlooking Greys Road.

The event, which was organised by town councillor David Eggleton, began with a short presentation about the work of the Royal British Legion by John Green, chairman of the Henley and Peppard branch.

Children from Rupert House took turns to read a lines from a poem called A Soldier From World War One.

Sacred Heart pupils read together an acrostic poem called Remember in which the first letter of each line spelled the word.

Jonty Priestly and Dulcie Meachinn, from Valley Road primary, read a poem together called The Power of the Poppy.

Lily Whittam, from St Mary’s School, read We Stand and Remember and Freya Ogborne, from Badgemore primary, read a poem called I Don’t Know, which was written by her classmate Clara Ruiz.

After the readings, Henley Mayor Kellie Hinton thanked all the children before they lined up to place their crosses in the ground. Councillor David Eggleton, who is chairman of Gainsborough Residents’ Association, said: “It’s important we get the children involved so they understand remembrance and are able to tell us what it means to them.

“We know what it means to us but we have to pass it on. We are hoping to do something special next year to mark 100 years since the end of the First World War.”

Mr Green said: “Events like this are important as it helps educate children on the true meaning of the Poppy Appeal. Most people know it means remembering those who have been killed in wars, not just the First and Second World Wars but others since then.

“But more than that, the poppy is a symbol for the future.

“All the money from the Poppy Appeal goes to help those families of servicemen and women who have been damaged physically or mentally through those conflicts. We hope the children will help carry it on.”

Councillor Hinton said: “David wanted to do something with the schools. Children are very organic with what they say and we get a really honest view of what a child sees through their own eyes.

“They wrote the poems to say what remembrance means to them and it gave them a chance talk about it with each other. It brings the next generation together to remember what has been done for them.”

In 2014 Cllr Eggleton organised a similar event and the following year he and Paula Isaac, vice-chairwoman of the residents’ association, brought children from the town’s state schools together to create a giant poppy that was photographed with a drone. Each petal included the school logos.

Last year he and Cllr Hinton created a Remembrance window display at Facy in Market Place.

Councillor Eggleton said: “Originally we came up with the idea of a memorial bed of poppies.

“We planted lots of seeds, which came out in the first year but not since, so we have gone back to poppy crosses.”